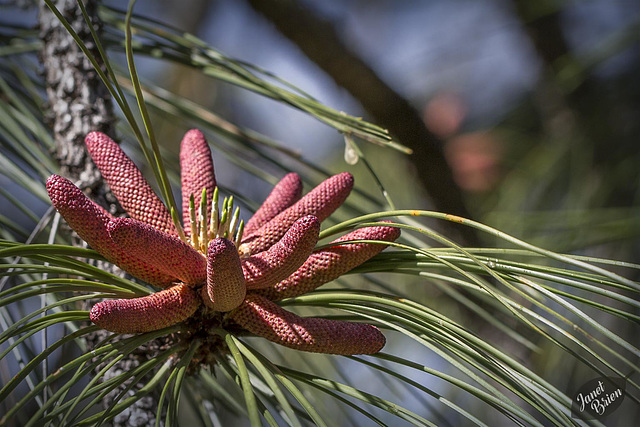 One of the things that drew Steve and I to southern Oregon is the close proximity to beautiful natural areas and outdoor activities. In fact, our lovely 26 acres is located on such a pretty road that it's a regular bike and motorcycle ride for local clubs. Steve and I have explored many of the hikes in the area and one of the hikes took us to a place called

Lost Creek Lake, which is a mere 45 minutes from our home. We've been on a few hikes along the lake and really enjoyed them. So when we started looking for a good choice for an RV destination close by but in a pretty place, we both thought of Lost Creek Lake as a likely candidate. It turned out that there were plenty of campsites available, and being a state park, the price was really affordable too!

It was so nice to have such a short drive, and yet it was so lovely. Spring in southern Oregon is incredible. Green fields everywhere, countless farm animals to see (babies too!), flowering trees here and there. As we drove along, we got glimpses of the well-known and popular Rogue River through the trees. Sometimes wild and roiling, it tumbled over rocks and boulders. In other places it flowed smoothly through deeper areas, dappled shadows of trees.

Making our way into the hills on our curving road, we soon left the farmland and the forests and meadows took over, always with the Rogue River as a lovely escort. Before we knew it, Lost Creek Lake was just up the road! We pulled in and soon located our site, a lovely, large spot that was easy for Steve to back into. We didn't even need to unhook the truck if we didn't want to, it was that long! However, we did unhook it because it's necessary for leveling the trailer.

Our first impression of Joseph Stewart State Park was BEAUTIFUL! Every site has lots of space around it. Trees everywhere (conifers and maples, lots of others too) and mowed grass meadows absolutely everywhere. We were amazed at how pretty this place was. The park has over 125 individual sites and they have cabins too! On top of that, there is a marina and roped-off swimming area too. How could such an incredible place be so close to home? We felt like we hit the jackpot.

Once we got set up, we enjoyed a melt-in-your-mouth ribeye steak perfectly grilled on the bbq along with lovely asparagus and portabello mushrooms sauteed in butter…YUM!

We had just enough time last night to hop on our bikes and go on a several-mile jaunt on some awesome trails! We got to enjoy the last of a beautiful sunset over the mountains as we rode along and found ourselves travelling in and out of forest and meadows…how GRAND!

We slept like rocks, it is so peaceful and perfect here. We have also discovered the cell signal is almost nothing. I hope I'm successful getting my two pictures up today! (Well, it looks like using Steve's cell service did the trick! Posting this early because I didn't know it we'd be successful...HOORAY!!)

I wandered around a little bit this morning with my Canon and macro lens and got zillions of cool shots. I really liked this pine "flower" and so it's my main picture for the day. My inset shows our truck in dappled light this morning with our trailer at our site! HOORAY for RV camping!! :)

Pam, you would certainly enjoy this pretty place. You're in my thoughts! *BIG HUGS MY DEAR*

RHH, Horizon 36, TigerHead, Rosalyn Hilborne and 44 other people have particularly liked this photo

Jenny McIntyre club
Wow what a great looking "pine flower" - it looks beautiful in that pink colour. As for the inset - your RV and truck look brilliant. It must be so lovely to be able to just upsticks and go wherever you want to. I'm very envious, but thrilled at the same time, because through you - I'll be going to visit these lovely places through your eyes
13 months ago. | Permalink

Annemarie club
what a great find and image
13 months ago. | Permalink

tiabunna club
An interesting, colourful and well taken 'pine flower', Janet. It sounds and looks like a great camping ground too.
13 months ago. | Permalink

Awesome colour, detail and sharpness as always. I especially like the "scales" on the cones and the delicate needles! A lovely out-of-focus background too.

A great pic of your rig.............a proper home-from-home! As always I've enjoyed reading your narrative and I'm glad you're enjoying yourselves!
13 months ago. | Permalink

Chris10 club
Great place to be there in your holidays Janet... I love your stories as always...

Esther club
Sounds like you are having a great vacation.
13 months ago. | Permalink

RHH club
This is beautiful, Janet, and one I missed earlier from your Lost Lake trip (workin' my way back through your photostream). Love these new growths on the pines in the spring. This looks like Ponderosa, but I may be wrong. Whatever it is it's stunningly beautiful and superbly photographed. I learned only recently that evergreens have male and female cones, the former falling off the trees very quickly after pollination takes place. I suppose one could take that as a commentary on life but I'm not going to attempt it.

Spent yesterday working on the garage. Have to do one side at a time because of all the junk in there - move it to one side and work on the other side and then do it all over again. The walls that join the house are drywalled but were unfinished, seams not taped, corners not finished, so I finished all that and then put up insulation and OSB (particle board) on the rest. Had intended to do drywall, but contractor son suggested OSB and that was cheaper and much easier to handle. Now a coat of primer on it all and paint it tomorrow.

Was so tired last night I went to bed at 8:00, but the result of going to bed early at my age is that one wakes at the sound of a bird, so here I am at 4:00 am doing Ipernity. Nancy is still sleeping but will up with the sun - wants to get the back yard finished and probably will accomplish that today. Needs mowing, but with all the work she's doing it's hard to get the mowing done. When I finish this then it's time to make a flat white and enjoy that. Can't start the day without it, but you know that.

Here's another photo of a White Pelican with that "plate" on its nose. You'll probably like the comments as well: www.ipernity.com/doc/162835/17514001. We have seen so many birds here and so enjoy enjoy living out in the country and by the lake. We lived in town (Lynden) the last 15 years and it was a nice town but it's not the same as living in the country. Nancy was out working in the yard and had a hawk chasing a squirrel while she was out there. I'm envious.

So thankful that you and Steve are doing so well. To see someone else working at their relationship and making it work is wonderful. Maybe it's difficult for you to understand that that means so much to me but it is an encouragement to me - to us - also. Keep at it, girl, we're cheering you on, both of you. Wish, too, you guys were closer, but perhaps we'll have opportunity to meet some time.

Better get at some other comments. Way behind.
9 months ago. | Permalink