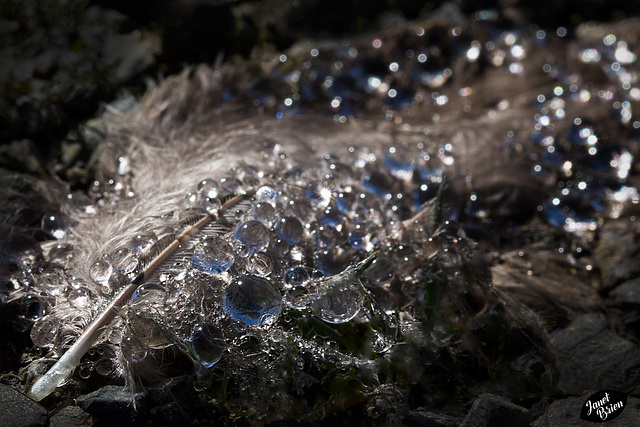 What a crazy day for weather. It started off very cold and frosty. Then the sun rose and melted everything. I heard the frogs singing during the day and then I looked out later, stunned at the big change. Along with the large and beautiful group of ten does and fawns nibbling at the grass in the meadow, angry storm clouds had moved in overhead. They looked like they were about to pour cats and dogs and I expect to hear rain on the windows at any moment! It's like that a lot here in southern Oregon, especially during spring. I think the weather is starting to practice!

Today's picture is a feather I found on the road one day. I noticed something twinkling on the ground and kneeled down to see what it was. It took a few seconds to recognize that it was a feather because it was positively covered with droplets! I couldn't get my camera fast enough! I have also included two extras as insets: one is a close-up that shows some really cool details and the other is from above that shows the whole feather. That picture was taken with my flash and the appearance is kind of intense but you can see how crazy it looks. I'm also including another panorama to show the intense but lovely weather here!

Pam, I looked for "feather" on your photo stream but only found a picture I've mentioned on another post—your lovely peacock feather and "Silence" poem. So I looked through the search and picked a picture that I loved...an absolutely adorable pair of fledgling chicks that I couldn't stop cooing at. How amazing that you were able to climb up a ladder to get that picture! I hope that you are having a good day today!! SENDING HUGGGGGGS!!!

Ronald Losure club
The details of the dew on the feather are amazingly beautiful.
20 months ago. | Permalink

RHH club
Incredible. Those feather photos are out of this world. The panorama is gorgeous, too, but I have seldom seen anything as beautiful as those feathers and that first shot is pure magic. Trip is going well but for a retired guy it's been way to busy.
20 months ago. | Permalink

Rosalyn Hilborne club
The main shot is stunning Janet. I love the touches of blue in the bubbles!!
I will have to catch up later with your other pictures...they look lovely also!!
20 months ago. | Permalink

tiabunna club
Those feather images are absolutely stunning, Janet. I can't say I've ever seen a feather look that way in a photo. Go to the top of the class for these! A lovely landscape pano too.
20 months ago. | Permalink

cammino club
Fantastic macro. The world in miniature can be so fascinating!
20 months ago. Translate | Permalink

Jenny McIntyre club
OMG Janet - what incredible pictures. The bubbles of water is just fantastic. I can't get over how amazing it looks on the feather - who would know what water can do to a feather? Your picture of your land is superb. The table mountain looks like an island with the mist surrounding it like that.
20 months ago. | Permalink

A great find!
20 months ago. | Permalink

Susanne Hoy club
The feather covered with droplets looks like a piece of jewellery. I like the main picture and the first inset the best.
20 months ago. | Permalink

Superb macros and detail here! I am lost for words!

Best Wishes, and a good weekend
Peter
20 months ago. | Permalink

Eunice Perkins club
WOW!! encrusted in sparkling beauty!! A feather has never looked quite so glamourous before!!
20 months ago. | Permalink