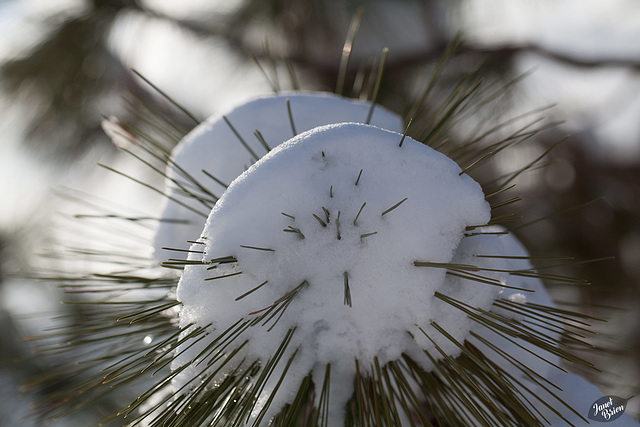 As I type now it's 8:45am and SNOWING! When I first got up at 7am it was only wet out but no rain. As I got my day started I looked outside at about 7:15am and huge, soft, puffy flakes were drifting down from the sky. I could hardly wait to get out there to experience a heavy snowfall!

Have you ever walked in falling snow? It is a delightful experience. Soft flakes come down and land on your clothes and in your hair. If you're lucky, you can stick your tongue out and catch a flake there too! Depending on the dryness of the snow, you can often wipe it off of you before it melts. This morning's snow was extremely fluffy and though I had my umbrella with me, the flakes drifted down and under it and I got snow all over me! The snow was falling so thickly that I couldn't wipe it off fast enough before I was covered with snow again. It landed on my umbrella with a steady fluffy patter of "plump-plump-plump" and piled up so that I could actually feel my umbrella getting heavy with the snow sitting on top!

I walked up to the top of the hill where I take my panoramas and somehow managed to hook my umbrella into my clothes so it didn't fall to the ground while I held my phone and took pictures. I hoped the pictures would show the falling snow…and as you can see from the insets, I was successful! (The last inset I just took a few minutes ago--late afternoon--there is snow on the far hillsides and snow is coming down too!)

Walking down the drive to our gate, I considered turning around and going back inside because I would be soaked in no time if the snow continued to fall heavily. But 30 seconds later the flakes became much smaller and no longer drifted under the protection of my umbrella. I loved walking along this way, looking out at the snow falling down across the property. There is a very special peace when you walk in the snow. You hear the squeak of snow as it compresses under your feet but other than that, it's silence, serenity and a sense of peace in this beautiful scene. I discovered a long time ago that if you want to truly experience a type of weather, you must be in it--not merely looking out at it. Every kind of weather has a different feeling. Walking in snowfall is the most special feeling to me because of the peace that comes over me. It's similar to walking under an umbrella in the rain but 10 times better. :)

After returning to the house, I kept an eye on the snow which continued to fall for the next hour or so. Then it stopped, the sun came out and just like that the snow melted and disappeared. We are supposed to get more snow in the coming week and maybe it will finally begin to stick. I would love to be able to walk around in drifts of snow. A proper snow shoot would be super but I'm not holding my breath. It's not getting cold enough and not likely to. But I really enjoyed my adventure today and walking in the heavy, fluffy snow was magical!

Today's main picture was one I discovered in my archives the other day. I really love the way the pine needles look like a porcupine! It's another one of those surprises that makes you wonder how it wasn't processed to begin with! In fact, the whole folder is full of snowy gems and hope to get at least some of them finished for show-and-tell. :)

Pam, speaking of porcupines, have you ever seen any around your property? I haven't but I know they're out there. When Molly and her puppy found their way onto our property, we didn't immediately make them indoor dogs. We fed them and provided a very comfortably furnished Dogloo on the porch to sleep in. The pair would sometimes wander onto the BLM property nearby and one day the 8-month old pup came back with a bunch of porcupine quills on his nose and a few on a paw. Thankfully we were able to remove them ourselves. Until that day we didn't know there were porcupines in the area. It's amazing how many animals live around us that we aren't even aware of. Well, I sure do hope this is a pleasant Saturday for you my dear! *BIG HUGGGGGGS*!! :)

Colette NoËl club
Beautiful picture ! I love to read you ! ;-)
20 months ago. | Permalink

tiabunna club
What an unusual image, with the spiky encrustations coming from the snowballs! Well seen and captured, as were the other images in your PiPs.
20 months ago. | Permalink

Roger (Grisly) club
Excellent series of winter images Janet, Snow looks beautiful in your shots but it's pain in my urban environment..
20 months ago. | Permalink

Amelia Heath club
I love the story writing, Janet. The 'porcupine' is lovely too. We so rarely get snow, but I know exactly how you felt. Sometimes if we short fall of very fine snow, I can see the individual snowflakes on my clothes.
20 months ago. | Permalink

Susanne Hoy club
What a stunning photo, Janet! Your snowy porcupine looks so funny! I love the bokeh too. The insets are also great. Especially I like the first inset with the seed pods in the driving snow.
20 months ago. | Permalink

Pisti club
What a wonderful image,but I like the insets best. I love snow, but only on sundays. Otherdays I despise it, because driving my car on icy roads is uncomfortable.
20 months ago. | Permalink

Keith Burton club
It's really amazing how snow immediately transforms a landscape into something wonderful - until it turns to dirty slush..!! You have to get in there quickly if you want to get decent images.

Five really beautiful images in the PiPs too.................you're really getting into this phone photography now, aren't you? I especially like the 1st and 3rd PiPs. Great work as always!
20 months ago. | Permalink

Rosalyn Hilborne club
I love all of the pictures Janet! The main shot made me smile! I am doubly impressed that it's straight out of the camera :)
20 months ago. | Permalink

J. Gafarot club
Congratulations for this very beautiful photo all the more for its authenticity.
20 months ago. | Permalink

Betty【ツ】 club
I'm glad to see that the 2nd pip shows your landscape, as I assumed in another picture I just commented on! :o)) I also like the sensations in the snow...
20 months ago. | Permalink

Valfal club
Wonderful series of images you took of the snow falling, Janet! We are about to get hit again with more snow in my area! Actually we could have had way more snow this season, but was lucky enough to get more rain than snow. Above freezing temps happened during some heavy rains. We could have had several 2 ft. snowfalls if the temperatures stayed below freezing!
20 months ago. | Permalink

Jenny McIntyre club
Oh Janet what fantastic PiP's - your land is indeed magical and even more so with the snow coming down. That pond looks fabulous, is this the one you were concerned about when you had all that rain?

As for your main picture - this is absolutely stunning. It's so amazing how the snow is shaped like discs over the needles. Wonderful photos indeed.
20 months ago. | Permalink

Esther club
What a great title. And what a good eye you have to take such gorgeous pictures.
20 months ago. | Permalink

NO WE DO NOT HAVE THEM HERE THANKFULLY. IT IS NO FUN TO HAVE TO THE DOG TO TE VET SEVEERAL TIMEAS A YEAR TO REMOVE SPINES THAT CAN NOT BE REMOVED ANY OTHER WAY. ITS HELL FOR THE DOGS.
20 months ago. | Permalink

Gudrun club
What a wonderful photo with the needles all sticking out of the snow:-) I love the inset photos which show how hard it snowed, I love watching the snow fall (from a dry and warm place;-)
20 months ago. | Permalink