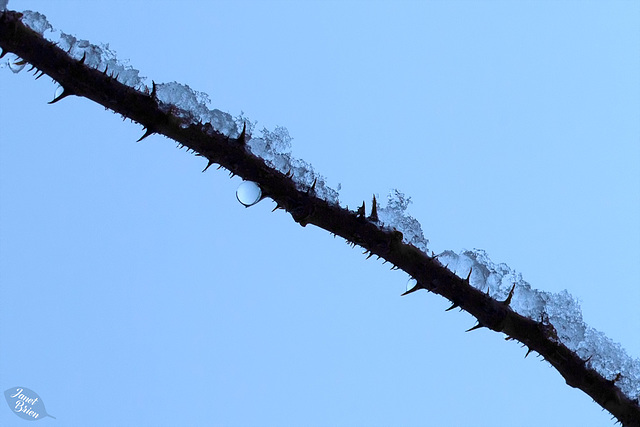 It's really and truly snowing outside this morning! I checked during the night but only rain greeted me and I wondered what I would see upon arising. Peeking out first thing...nothing but a wet world. Boo. Still, it was going to be extremely cold today and there were storm clouds overhead. The perfect recipe for snow.

At a freezing 27 degrees, I decided that I'd only do my minimum walk of 3 laps (15 minutes) today. I'm tired of returning to the house with frozen fingers and toes no matter how hard I work to keep warm. There are days that I feel cold for hours unless I take a long, hot shower or sit in front of the heater for ages to warm up again. It's no fun to feel so uncomfortable. I do love those showers though--except for the part where I have to get out at some point!

If you can believe it, frogs were singing their hearts out down at the pond! Perhaps they didn't get the memo...IT'S FREEZING OUT HERE! The fact of the matter is that they are on an evolutionary timer and they know it. Our pond dries up at the beginning of June so they must find mates and produce eggs as early as possible. Those eggs must then hatch, the tadpoles must grow up and transform into froglets before the pond evaporates. Frogs who sing the earliest have the best chance of finding mates sooner, and thus, the best chance that their babies will grow up and produce the next generation. Survival of the fittest is a real thing and out here in the "sticks", we see the reality of living and dying based on tactics like these. Still, I must say it's pretty incredible to hear frogs singing when it's snowing!

By the end of my 15 minutes there were itty bitty flakes falling and I was happy to get inside because I was already getting very cold despite marching up our hill three times. After another fifteen minutes the snow was coming down in bigger flakes and managed to cover the ground somewhat. I enjoyed looking at the contrast on the tree branches of white against dark brown. The snow continued for maybe half an hour and then petered out. The sun tried to break through the clouds and though it failed, the warmer temperatures melted all of the snow and now I look out and wonder...did it really snow or did I just imagine it?

I didn't get any snowy pictures today except from my phone and they aren't worth posting. So I decided to dig around in my archives and process a few images I'd taken a while back...I have so much photography which deserves my attention. It's just incredible the piles of pictures that I don't have time to process!

My main image is a snow and droplet-covered rose cane in heavy silhouette. I also found a picture of a day we had heavy snowfall a few years back. And I couldn't resist posting an adorable picture of our dear Basset Hound, Moosie, when he was just over a year old. How we miss that sweet boy. A picture of Zoey is here too, our adorable Boxer who we think of every day...our home feels so empty without them. :(

Pam, has it been snowing much your way? Hopefully the weather isn't too bad. We're expecting more snow in the next few days but it won't be much. I did a search on your stream for "snow" and found a picture I loved of your beloved Flicka on his birthday. Maybe our dogs have met over the Rainbow Bridge. Our sweet pups…how we miss them. Sending *hugggggggggs* your way!

Gudrun club
A striking diagonal and wonderful detail! It's the waterdrop(s) that really make the photo! I love the first PiP with the dreamy atmosphere and your dog photos are so cute! They seem to have enjoyed the snow:-)
20 months ago. | Permalink

Rosalyn Hilborne club
I always find it great fun to go out with the camera after snow or a frost. So suprising what we can capture in macro. A superb series Janet and I love your picture of Zoey!
20 months ago. | Permalink

Admired in:
www.ipernity.com/group/tolerance
20 months ago. | Permalink

Zulma club
Simple and artistic view of our surroundings my dear Pod Sister. Love that angle with the blue triangles. Love your dogs, adorable. It has to be fun to be a dog in snow. Well, I like being human, but...still...Thank you my dear Janet for your support and words of encouragement always. You are awesome!!
20 months ago. | Permalink

tiabunna club
Lovely images, but your main one had me guessing until I read your notes. It looked so much like an aerial view of the crevassing in a glacier as the ice breaks, with a little extra contrast - see the large split at the lower right of this image www.ipernity.com/doc/tiabunna/29488335/in/album/534975.
20 months ago. | Permalink

Annemarie club
most beautiful close up
Have a great rest of the week.
20 months ago. | Permalink

Keith Burton club
From the thumbnail, I had a similar though to that of tiabunna's (above), but viewed large it's immediately obvious what it is............although I'm a bit disappointed you haven't been up in a balloon taking aerial photos ;-)

I really like the plain blue background and the deeply contrasting diagonal of the thorny branch. The water droplets and the frosted topping are really lovely and really make the image special.

I love the pics of your two beautiful dogs. I can understand how much you miss them. We are "dog less" at the moment, but have been considering getting another one this year. It's a difficult decision.

The pic in the first PiP is just enchanting! Such a magical winter's scene, beautifully composed and taken. It would make a wonderful Christmas card..!!
20 months ago. | Permalink

cammino club
It seems to be melting snow?
20 months ago. | Permalink

Betty【ツ】 club
I'm unforgivable, it's been too long since I've come to see your pictures..... I love your dogs' ones, access is forbidden so I can't offer you groups.
But this frozen diagonal all in thorn is also beautiful.++++++
20 months ago. | Permalink

Roger (Grisly) club
A lovely series from the archives Janet, the dogs are adorable and the thorny branch a gem,
20 months ago. | Permalink

RHH club
Love the drops and snow on the thorny branch. Hard to resist taking endless photos when you get to photograph something like that. I just looked and the folder where I keep the ice, now and frost photos already has over 800 photos in it ... since the beginning of the year, and those are the ones I didn't immediately discard.

Sunny day here and the Flickers and Woodpeckers have really been active. Got more photos of both (and what am I going to do with them all?), especially the male woodpecker. Noticed that the female Flicker is rarely gone now. She hangs around in the dead trees near our yard and comes for suet every chance she gets.

Feeling better, but as you said, not much energy. Did get some cooking done. Had Pad Thai for our evening meal yesterday and the leftovers for lunch today. Probably make some more noodles for tonight. Rice noodles are not only easy to make but you can put almost anything with them and they taste great.

Out for a walk earlier and froze, though the sunshine felt good. Saw what was perhaps (?) the first sign of spring. One of the lichen species is producing little fairy cups that I assume are the fruiting bodies. Nancy noticed them while on a walk and has been going out to photograph them nearly every day. They don't seem to mind the cold but spring is a long ways away.

Haven't had any guests since Sunday and that's good. Just don't feel up to it. But we do have Neal home Tuesday and Thursday mornings. Have our daughter and son-in-law Friday night - their "date" night is often coming here for a meal. They leave the older kids to babysit the younger ones.

Just found out that our youngest son and his wife are having a baby, their first, in August. They told us by giving us copies of the ultrasound when we were there last week. Really excited for them. She's the other Jessica in the family and is known as Jessaroo to distinguish her from our daughter (she's Australian).

Anyway, better get some work done instead of rambling.
20 months ago. | Permalink

Jenny McIntyre club
Oh I love your photos Janet. The pictures of your two fur babies in the snow are fantastic. Pippin's sister, Tippi, loved the snow but he definitely doesn't - you should see him trying to walk through the snow without his feet hardly touching the ground - it's hysterical. He sometimes moans while he's looking through the catflap, it's as if he's telling me to stop the rain or whatever the problem is!!! Frogs singing in February - hmm - maybe they don't want to wait any longer. It may be cold, but they are feeling HOT!!!!
20 months ago. | Permalink

Dave Roberts 2014
An excellent capture of the snowflake shapes Janet wonderful images of winter! The dogs look so nice there!
20 months ago. | Permalink

Susanne Hoy club
The diagonal looks great. I like the ice crystals on the thorn branch. The round water drop looks like a tiny glass sphere.