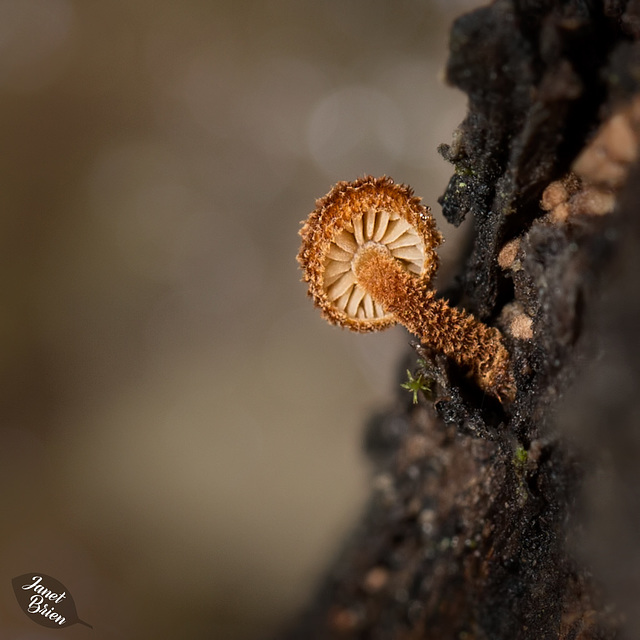 Looking over my photo stream today, I've noticed a lacking of MUSHROOMS! That needs to change! :) I have a couple more mushrooms from my trip down to San Anselmo but I am not sure they are "main picture worthy." I do have one which I've finished and you'll see it as an inset.

This furry little mushroom I'm sharing today was a wonderful discovery. A month or so ago I'd decided to wander around our lower forest on a very wet morning after it stopped raining. I was hunting for mushrooms and other fungus and focused my attention on sticks and branches that had fallen to the ground. I found many interesting lichens and mosses, and I also discovered some micro mushrooms too.

After studying a lichen-encrusted stick, I spotted another one nearby and picked it up carefully. First I found a micro mushroom...but then I spotted something so small I could hardly even see it. It was maybe the size of a lower-case "o" and it was FUZZY. It looked like maybe it could be a mushroom so I took a set of pictures. Studying the branch even more carefully, my nose nearly touching the surface, I spotted another one and it was most definitely a fuzzy mushroom! It was sitting next to several more that were just starting to grow. My excitement had no bounds! I'd never seen such a cool little fuzzy mushroom!

My main image features this darling little mushroom. My first inset shows a family portrait as it stands next to some extremely shy family members who don't want their picture taken! :D Aren't they adorable?! They are so small they are barely visible and I am so delighted that I got pictures to share. I went back the next day to take more pictures but I couldn't find the stick. So sad! I will keep my eyes open, maybe someday I'll find more!

My other inset was taken down in San Anselmo on our first hike. In fact, Nathalie found them and I heard her whoop in excitement when she spotted the group. I could see what all the fuss was about when I got to her. The group was HUGE! I think they must have been about 1.5 feet across from one side to the other. And STRANGE...they are such an odd cluster, aren't they?! I love them! Thank you Nathalie for discovering these mushrooms (and you found the others I photographed too)!

Pam, I hope today was better than the past couple. I know you've been on a rough ride. Maybe the sun will come out soon for you. *hugggggs*

Suggested groups:
55 comments - The latest ones

Jenny McIntyre club
Oh wow Janet - what an extremely beautiful photo of the furry mushroom. You certainly do seem to have an incredible amount of different types of fungi in your part of the world. I can hardly believe it's so small - your eyesight is amazing too - to notice these when they are the size of an "o". Thank you for sharing it with us.
20 months ago. | Permalink

And the deep dark colors make it look delicious!
20 months ago. | Permalink

Pam J club
I LOVE THIS BRAVE LITTLE ONE
20 months ago. Translate | Permalink

Annemarie club
again a most beautiful close up!
Brava:)
20 months ago. Translate | Permalink

Nouchetdu38 club
It's really well observed! Nature reserves many beautiful surprises for those who know how to admire it: your photo is the proof!***
20 months ago. | Permalink

Eunice Perkins club
What a beauty ...and what a beatiful image!!
20 months ago. | Permalink

Ludmila Litvin club
What a shaggy mushroom!
20 months ago. | Permalink

sasithorn_s club
A fabulous set of mushroom pics, Janet!...All taken with absolute perfection.
I love each and every one of them❤
20 months ago. | Permalink

Keith Burton club
Janet...............this is a magical macro image! The detail is nothing short of amazing considering how small it is............the shots in the PiPs are excellent too and I love the earthy colours in all three of the images.

tiabunna club
Fascinating fungi and fabulous fotos, Janet. I'm suitably amazed by the main image, given how small the subject is - you obviously must be carrying a good tripod (and lighting) as part of your kit when out walking.
20 months ago. | Permalink

Rosalyn Hilborne club
This is what is so good about photography! You can blow a picture up and really study it and see it in a different way that the naked eye does not see. Three superb shots.
20 months ago. | Permalink

micritter club
Now that I looked at it again and noticed the note about its size: do you carry a magnifying glass with you? How do you even notice something that small among all the other vegetation? I'm amazed at that,let alone my amazement at the quality of your image.
20 months ago. Edited 20 months ago. | Permalink

Gudrun club
So tiny and so perfect, you have achieved three great mushroom macros!
20 months ago. | Permalink

Xata club
A top one!
20 months ago. | Permalink

Zulma club
Oh my oh my! I kept seeing this yesterday on first place almost all day and I wanted so badly to visit and touch it in person but was afraid it would disappear from that position...and today here I am hoping it goes back there, where it belongs!! What an amazing photograph my dear dear Pod Sister. You are awesome! Hugs!!
20 months ago. | Permalink

Matt club
This is outstanding macro photography!
20 months ago. | Permalink

Esther club
What an unusual and attractive mushroom.
20 months ago. | Permalink

Very nice picture!
If you hadn't told us it was a mushroom, I would never have guessed. I have never seen one before!!

Best Wishes, and a good weekend
Peter
20 months ago. | Permalink

Colette NoËl club
What a lovely picture ! This little mushroom is beautiful ! The insets are lovely too !
20 months ago. | Permalink