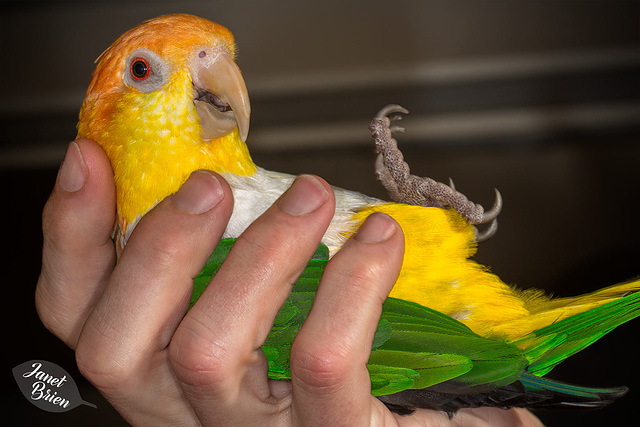 My fluffy little alarm clock let me sleep in this morning! I woke up at 7am for once and the extra sleep was so wonderful! I sprang out of bed so happy because it's WINTER SOLSTICE!! HOORAY!!! Now the days will finally start to get longer...THANK GOODNESS!!

I was buzzing merrily around in the kitchen this morning until I got to the part where I opened the 'fridge to get Pumpkin's bowl of fruits and veggies...ACK! Sound the general alarm! There weren't any! I'd forgotten to cut up a new batch the night before. BOO!! "Ah well," I thought to myself, "no worries! Let's get this party started, shall we?"

Reaching down to the veggie compartment, I pulled it open and grabbed the bags of celery, bell peppers, carrots and apples, turned around and plopped them onto the counter as the refrigerator door closed behind me. From her perch at the kitchen window I distinctly heard Pumpkin chuckling at me as she watched the latest episode of the Mama Bird Show...

I stepped over to the other counter and grabbed one of our pretty bamboo cutting boards and pulled out my favorite knife. It's a 6" J.A. Henkels from Spain that Steve's had for many years. I just love it because the blade stays so sharp. Perfect for cutting up Chicken's fruits and veggies! (Pumpkin has a million nicknames but our favorite is Chicken. Others include Fluffball, Fuzzball, Fat Pants, Fluffy Butt, Chick-pea, Fruit Bat, the names go on and on!)

Pumpkin whistled back and forth with me while I rinsed, sliced and diced two spears of celery, half an apple, a dozen baby carrots and half of a red bell pepper. Before I chopped up the celery, I cut off the ends and tossed them to Molly. She was ready and waiting with perked ears and bright eyes. Enthusiastic crunching soon filled the room, a sound which made me smile and elicited a bemused cackle from Pumpkin. I pulled out a sliver of carrot and handed it to her, who gronked joyfully and munched with gusto.

Sweeping the pile of fruits and veggies into a metal bowl, I mixed them up, grabbed one of her blue food dishes and loaded it up as usual. Yay! Now Pumpkin had a brand new batch of fresh food. I covered the metal bowl, put it in the 'fridge and continued with my routine, finally bringing Pumpkin upstairs with her food. As I closed the door to the bedroom, Pumpkin was diving into her bowl and gronking with joy, "YUMMY BREAKFAST!!!" Oh, how I love that little girl! :)

Initially I thought that it would be nice to share a snowy picture today to honor Winter Solstice, but instead I've decided to honor Pumpkin instead! I got Steve to hold her on her back, a position she loves--it's also so adorable that I thought you would all enjoy it too! I also included an inset to show the food I cut up for her and a holiday greeting to all of you. :)

Pam, it was so wonderful to get such a lovely note from you yesterday on my latest picture! I am overjoyed that things are a little better for you these days. Let's hope for continued improvements in the following days my dear! *BIG HUGGGGGGGGS*!!!!!!

, Tractacus, Shmoo, Rosalyn Hilborne and 45 other people have particularly liked this photo

Pumpkin always looks so happy!
A very merry Christmas to you and yours too, Janet!
3 years ago. | Permalink

Pumpkin is so beautiful!!!! No wonder you love her so much! And no wonder she looks so healthy with such a great diet! Enjoy your weekend.
3 years ago. | Permalink

Merry Christmas and a Happy and Healthy 2019.
3 years ago. | Permalink

Admired in:
www.ipernity.com/group/tolerance
3 years ago. | Permalink

That is so much work you did!! Cool story and series...and I finally meet Pumpkin, great name for this little pretty bird. Enjoy the holiday festivities Janet, my dear pod sister.
3 years ago. | Permalink

Such a colourful bird!!!
3 years ago. Translate | Permalink

Wish you and yours a MERRY CHRISTMAS, dear Janet.
3 years ago. | Permalink

Merry Christmas and a happy New Year, Janet. All the best, Joe
3 years ago. | Permalink

So much nicer than my early morning wake up Janet, lovely image and a fascinating narrative,
Merry Christmas !
3 years ago. | Permalink

A very merry Christmas to you,Janet!!

Oh she is so gorgeous Janet. I love all her names, they all seem to suit her. You certainly feed her with wonderful food, how long does that amount last? So your dog eats celery????

I wish you and Steve a wonderful festive season. Big hugs from me xxxx
3 years ago. | Permalink

Nice to meet you, Pumpkin. :-) Very best wishes for the festive season, Janet.
3 years ago. | Permalink

SHE US A BEAUTY
3 years ago. | Permalink

Lovely photo!
All the best for you, Janet!
3 years ago. | Permalink

An excellent shot Janet and many thanks for posting to Fur, Fin and Feather.
I wish you a HNY.
3 years ago. | Permalink

What a beautiful and colourful parrot! It is a great wish of my wife to own and care for such a bird. And above all: to teach him how to speak. But in the exercise of the profession and with children the keeping of such an intelligent bird was impossible. And now we have no time ... :) by the way: The Pumkin album is excellent!
3 years ago. Edited 3 years ago. | Permalink