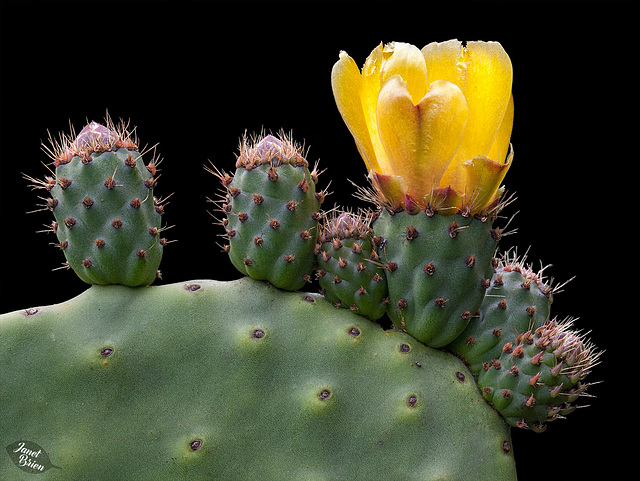 Wait a second! That cactus does NOT grow in southern Oregon!* Ok, ok, I did it again...this is another picture I captured outside the Conservatory of Flowers in San Francisco a couple of years ago. Near the jaw dropping acres of dahlias I mentioned the other day were other displays including some groups of cactus. I have always wanted to take a picture of a flowering cactus so I was over the moon when I found these! Dahlias? I don't need no stinkin' pictures of dahlias! Gimmee some pictures of these prickly pears! I was delighted that a bunch of my images turned out well but this one is my favorite. *actually they can be found in the deserts of Eastern Oregon.

I want to extend a huge hug to all of you who left such wonderful comments and favorites for yesterday's teasel leaf. I really wasn't sure if anyone would like it. I showed it to my husband first who loved it but well, he's my husband so I still wasn't sure. Plus, one way a photo is deemed a "success" is if you can recognize it clearly in thumbnail size. In that regard it was a failure, but sometimes you just gotta go with what your heart tells you. And interestingly enough, today was overcast and it's now raining—there was no glowing flag today and who knows when the sun will be out again?! It's going to be stormy for the next week and perhaps that leaf will disintegrate before it has a chance to glow again. I am so pleased that I have it immortalized. :)

Pam, I remember thinking about you when I was taking pictures at the Conservatory of Flowers because I know you would appreciate every moment. To be honest, I wish I could show you my fair city in all of its glory, though I've not lived there for many years now. So many incredible sights! I hope you are feeling good today, and please know that you are in my thoughts! :)

Suggested groups:
45 comments - The latest ones

micritter club
Must be viewed large on black. Incredibly lifelike. Tack sharp throughout.. Looks three-dimensional. A beautiful cactus and a beautiful composition.
20 months ago. | Permalink

tiabunna club
A lovely image of this cactus flower, Janet.
20 months ago. | Permalink

Zulma
So beautiful Janet, and so dangerous to the touch, love how they protect themselves!! With the dark background A++++!! Happy Turkey day.
20 months ago. | Permalink

Keith Burton club
Beautifully captured Janet...............the sharpness (no pun intended) and detail is awesome as usual, and the yellow flower fairly glows against the background.
20 months ago. | Permalink

Jeff Farley club
I get the point about the Cactus Janet !!!
This is a superb shot.
20 months ago. | Permalink

Roger (Grisly) club
Beautiful colour and amazing detail in a fabulous macro Janet,
The spikes look sharp enough for a recoil from the image,
20 months ago. | Permalink

RHH club
Amazing, Janet, that you also posted a photo of a Prickly Pear, and, yes, my Beavertail Cactus is also known as Prickly Pear, though a different species from yours. Your photo is better than mine also, especially considering the fact that you took it in a conservatory. I find photos in such setting extremely difficult. Our local conservatory in Manito City Gardens in Spokane does not allow tripods which makes photography even more difficult.
20 months ago. Edited 20 months ago. | Permalink

RHH club
Interesting to hear that took this outdoors. A permanent cactus garden outdoors would be wonderful but our climate doesn't allow it, though we do have a couple of native (frost hardy) cacti in eastern Washington. I wouldn't consider your photo blown out at the top either - there's still detail in those parts of the flower. I think the exposure is perfect.
20 months ago. | Permalink

Rosalyn Hilborne club
A great shot Janet. I once touched a prickly pear in Spain by mistake....ouch, did that hurt!!
20 months ago. | Permalink

Jenny McIntyre club
What a great photo - and I love the fact that you've found the "heart" shape for Pam. I have a flowering cactus on my kitchen sill, but it's not in flower yet!
20 months ago. | Permalink