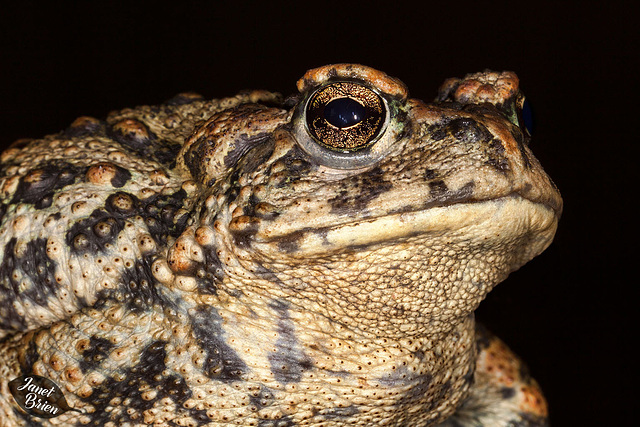 [2 more pictures above in notes]

In July 2013, I was in the middle of my 365 Project and on this particular day, I discovered a toad in our garage. Before releasing it, however, I could not resist taking lots of pictures! I ended up getting several very nice ones, and in the end, this one was never posted. Until today!! :)

Before I began working on the images, I decided to go down to our garage to hop on the orbital trainer and watch a bit of Lonesome Dove. However, in the quiet parts, I kept hearing small noises... scratching? Bumping? I stopped the video and listened again. *Scratch, rustle, bump* What the heck could it be? I angled my head up and wondered if one of our dogs was scratching at their bedding. *Screech... scratch*...no, that sound was down here...but...where? I got off the orbital trainer and began looking around, listening for the noises. I thought that maybe a mouse was digging a hole somewhere since we have had them in the garage before. *Scratchhhh* AH HAH!! It must be the box by the refrigerator! Moving quietly, I leaned down to look inside the box. Imagine my surprise when I discovered not a mouse, not a rat, but a juvenile TOAD trying to climb out of the box that it somehow managed to jump into!!!! I could hardly believe my eyes!! The next thing that hit me was the fact that if I hadn't heard this toad scratching on the side of the box, it would have died without question because it couldn't get out. That would have broken our hearts...I was overcome by relief and joy that I found this guy before he was too exhausted to make any noise!! WHEW!!!!!

Cooing softly at the frightened and exhausted toad, "Little fella, that's no place for you!" I gently picked it up out of the box and noticed that it was positively COVERED with dog hair, YUCK! Poor guy! So I brought it inside and held it under the sink while I removed all the hairs and assorted lint stuck all over. As I cleaned my adorable little buddy up, it began trilling at me! I giggled in surprise at the cute noises it was making! Finally, the toad was clean and ready to be released...but not before I got a couple of pictures!! :D Once I took a few images, I brought the toad out to Angel's Pond and placed him on the rocky beach area to recuperate. There's a ramp to climb out if he can't hop out. I checked a couple of times today and he's hanging out in the water under the ramp where it's cool on this very hot day. I expect he'll hop out when it gets dark, as these toads are nocturnal. (By the way, this is a smaller toad than the one I've taken pictures of, it was actually in the other wading pool that I call "Lucky's Pond"! :) I thought it was really funny that there's now a toad in each pond! :D

When Steve got home from his trip into town, I told him what happened and we were both so happy that I'd found this beautiful toad in time to save it!! HOORAY FOR HAPPY ENDINGS!!! :) :) :)

The texture and the eye, captured expertly!

Admired in:
www.ipernity.com/group/tolerance
5 years ago. | Permalink

fantastic captures and a great story, Janet! a pleasure to watch and read!
5 years ago. | Permalink

Excellent detailed toad close-ups and such lovely story! I'm glad you saved him:)
5 years ago. | Permalink

Glad you did post this great shot!
5 years ago. | Permalink

What a lovely fellow! Great shot! Glad you were able to find it before it was too late!
5 years ago. | Permalink

Great shots of your little pal and an enjoyable narrative to go with them.
5 years ago. | Permalink