357/365: "As long as the world continues to be strange and interesting, I still want to take pictures of it." ~ Moby 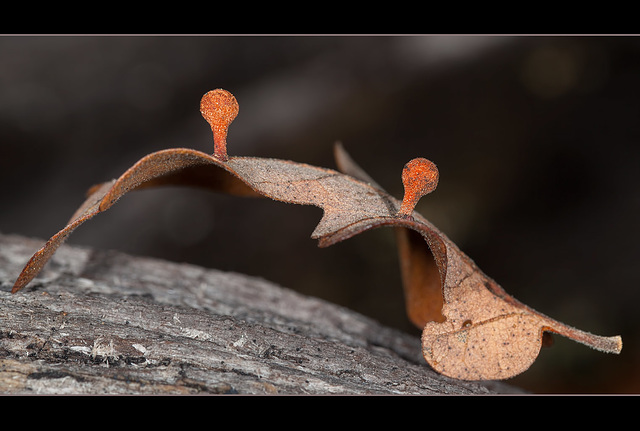 2 more pictures above in notes! :)

It was raining off and on today, so when it stopped, I immediately took the opportunity to go out and find my Picture of the Day. I returned to the same area of our upper forest as yesterday because I realized there is a lushness there which promises endless wonderful discoveries! I only went about 200 feet from the house, and there I found all kinds of mossy stumps and Oak saplings which begged closer inspection.

First I found some Pixie lichen, but they weren't quite right. Then I found a lovely little mushroom under the lip of a log, and got some nice images. Then, I was carefully sweeping away leaves when I saw the leaf in the picture above! WOOT!! Look at those tiny wasp galls!! I did some looking on the internet but wasn't able to find out what kind these are, but they're a brand new discovery for me! So interesting to look at, like something from another planet. If you don't know, a wasp gall has the egg of a wasp inside, which will grow as the gall grows larger, and eventually the adult wasp will emerge from the gall! You can see the escape hole in the inset image above! Totally fascinating!! :D

Richard Melville Hall (born September 11, 1965), known by his stage name Moby, is an American singer-songwriter, musician, DJ and photographer. He is well known for his electronic music, vegan lifestyle, and support of animal rights. Moby has sold over 20 million albums worldwide. Allmusic considers him "one of the most important dance music figures of the early '90s, helping bring the music to a mainstream audience both in the UK and in America". Wikipedia: Moby

Marco, Alain-Bernard, TKJ1966, Cat Shilova and 27 other people have particularly liked this photo

Wow, what an interesting looking leaf. I've never seen anything quite like it!
7 years ago. Translate | Permalink

a wonderful leaf! very beautifully captured!
MERRY CHRISTMAS TO YOU!
7 years ago. | Permalink

Amazing!
Have a wonderful Christmas, Janet.
7 years ago. Translate | Permalink

The rare and elusive leaf crab ;) Great find and shot!
7 years ago. | Permalink

Magical!
Wonderful Holidays for you and yours!
7 years ago. | Permalink

Never ever heard of a wasp gall before, but as I really can't see the point of a wasp - I've never wondered how they are born. Absolutely fascinating Janet, I love seeing nature in a totally different way. I don't wear my glasses when I'm out and about because I only need them for close ups, so I miss all these gorgeous mini-macros. With your wonderful pictures, I am sharing this world. Thank you. xx
7 years ago. | Permalink

What a great find and a stunning picture. Have a wonderful Christmas and all the best to you and yours in 22014.
7 years ago. | Permalink

quite cool!
7 years ago. Translate | Permalink

What a fascinating macro and explanation. Thank you.
Seen in Prime Lenses (fixed focal length) Group.
7 years ago. | Permalink

Great like a type of frog
7 years ago. | Permalink

Amazing! ...and a perfectly focused photo
7 years ago. | Permalink