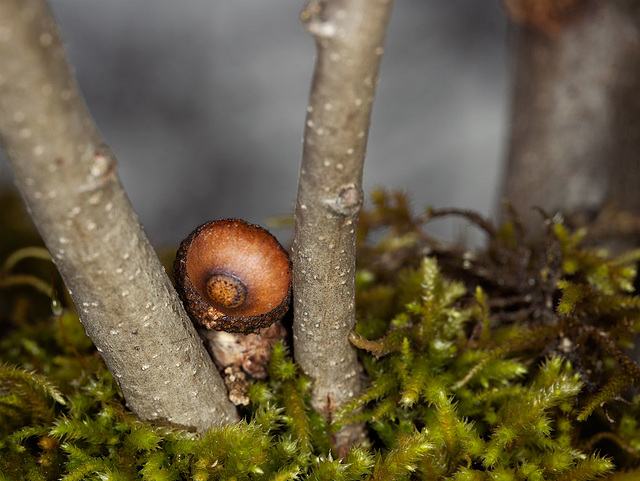 2 pictures above in notes! (One of them is a close up of the fungus I photographed yesterday and completely forgot to upload the inset!)

Although it was supposed to rain today, it was still dry when I bounced out of the house, eager to step through "Alice's looking glass" and explore the tiny world.

I didn't have to go far. Just over to an Oak tree about 50 feet from the house, in fact. First I found the acorn cap in the second picture I'm sharing today, and when I was done getting various angles, I looked up to find the cap above, balanced between two twigs! (No, I didn't place it there!) It was one of those things where I thought, "Oh, that's neat!" but then I realized how special it was, and knew it would end up being my Picture of the Day! :)

David Royston Bailey, CBE (born 2 January 1938) is an English photographer, regarded as one of the nation's best. He became a photographic assistant at the John French studio, then photographer for John Cole's Studio Five before being contracted as a fashion photographer for British Vogue magazine in 1960. Along with Terence Donovan and Brian Duffy, he captured and helped create the 'Swinging London' of the 1960s. In 2012, the BBC made a film of the story of his 1962 New York photoshoot with Jean Shrimpton. Wikipedia: David Bailey

, , , and 9 other people have particularly liked this photo

Great shot of this little "speed demon!" Hope you are well, and a Blessed Christmas to you and yours and all the best of the New Year.
Found and enjoyed in the group gallery at:
Hang It!
8 years ago. | Permalink

Such amazing details in this superb macro series! Love all three of them!
Seen through your eyes in: I ♥ Nature
Thanks for posting in our group !
8 years ago. | Permalink

David Bailey would be interested having you taking pics with him, Janet - your quality of pictures are just wonderful. Love this little cap.
8 years ago. | Permalink

Now that you mentioned "Alice's looking glass", these macro shots of yours really makes one to see the world like being downsized as well =)

And you keep on finding excellent quotes. Well said by David Royston Bailey!
8 years ago. | Permalink

Nicely taken, Janet, and a great quote.
8 years ago. | Permalink

A beautiful picture and a great quote. One I must pay attention to.
8 years ago. | Permalink