354/365: "Anything becomes interesting if you look at it long enough." ~ Gustave Flaubert 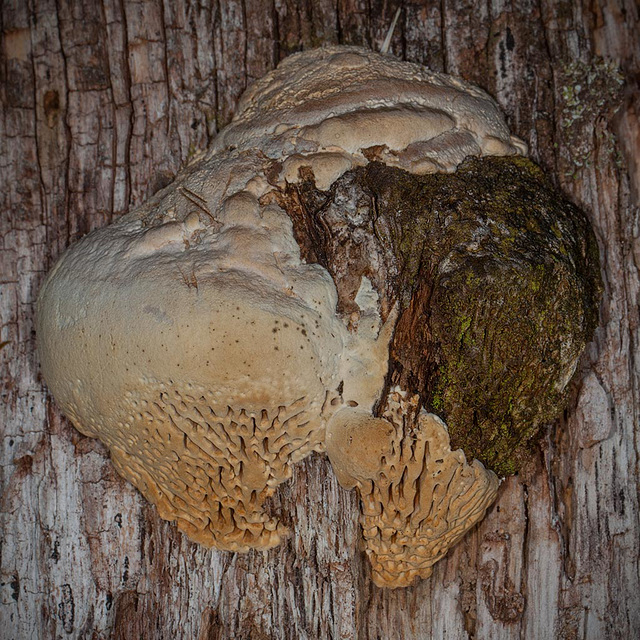 I was so busy today that the day flew by, and I suddenly looked up in shock to see that the sun was nearly down! Eeek!! I dashed outside and knew I needed to get my Picture of the Day right away if I intended on an outside image, as darkness was quickly closing in and the thick clouds above were heavy with impending rain.

For me, finding a nice subject usually requires me to "become one" with my surroundings. I need to slow down to feel the world around me, and I need to relax in order to see the natural beauty that reveals itself as I slip into the moment. When this happens, my senses become keener and I notice things I wouldn't normally. This "zone" is very special and makes me feel like I'm part of the natural world, as opposed to being just an observer. However, being in a hurry doesn't work, and the problem today was that I was really racing against time, so it was a challenge to keep myself from rushing. My solution was to race down to an area in the lower forest where I thought I might find something special, and then I stopped and just looked around, moving forward slowly and keeping my eyes open as I began to sense the forest.

I made my way towards the little footpath that the dogs and I walk on and then I saw a stump ahead, which made me smile because I remembered there was something special on it. Walking up to it, I found several polypore bracket fungi adhered to the old Oak stump, and I was again fascinated by them. If you look at these from any distance, or from above, all you see is a beige, boring lump. But if you crouch down and get really, really close, you will see that there are coral-like pores all over the underside! (see the inset image for a close-up) This particular fungus is especially interesting because the right side that looks like wood is actually old, dead fungus! I don't know if it died from something or if it's the previous fungus and this fungus is growing on top of it. Really cool to find and a neat Picture of the Day! I took several pictures and as I stood up, it began to rain. I made my way back to the house as it got dark and stepped inside just as it began to pour! What timing!

Gustave Flaubert (French: [ɡystav flobɛʁ]; December 12, 1821 – May 8, 1880) was an influential French writer widely considered one of the greatest novelists in Western literature. He is known especially for his first published novel, Madame Bovary (1857), for his Correspondence, and for his scrupulous devotion to his style and aesthetics. The celebrated short story writer Maupassant was a protégé of Flaubert. Wikipedia: Gustave Flaubert

Sylvain Wiart, , , Barra1man and 8 other people have particularly liked this photo

this is a living organism from our planet earth - not an alien. I´m so happy that you share all these wonderful things to us, Janet. Hope you have more time for yourself soon. *hugs*
8 years ago. | Permalink

We have an ice storm tonight as well !
8 years ago. | Permalink

What a suer shot and fun quote! Thanks for both, and I hope you are well, Janet! Have a great Christmas and New Year!

How fascinating - never seen anything like this before. Thanks for showing us so many unusual fungi. I've never been interested in them before, but your pictures make me want to learn more and to look out for them
8 years ago. | Permalink

Such a exciting image, wonderful details!
8 years ago. Translate | Permalink

Good photo of this polypore, Janet. The dark part is just old growth and the light is recent growth. This polypore could be around for many years to come.
8 years ago. | Permalink

Fabulous shot!
Beautiful picture!
Wishing you and your family A Merry Christmas and A Happy New Year!
8 years ago. | Permalink

For that phrase I really must say: "Laugh out loud!" =D Okay, I take that as a challenge =)
8 years ago. | Permalink