353/365: "Creativity is not the finding of a thing, but the making something out of it after it is found." ~ James Russell Lowell 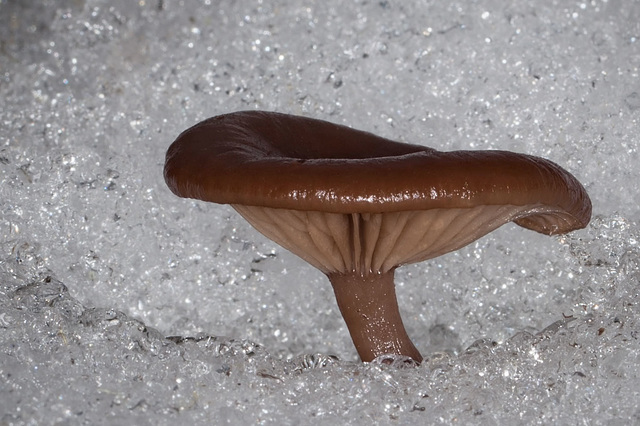 Today it was much warmer than it's been for weeks, about 35°F, oh my! :D It's amazing how long the snow has stuck around, since we got nearly 4" about two weeks ago but none since. It's been cold enough that it hasn't melted in the shady areas, which I like because it's pretty.

I went out without the dogs today and headed down to our dark and shady lower forest. I really hoped that I'd be able to find some mushrooms, but quite frankly, I was pretty sure there was no chance because it's been so cold. So instead, I thought I'd just cruise around and check things out.

Crossing the tiny, seasonal stream that's dry, I approached a fallen oak tree that I'm very careful around. You see, the top half of the dead tree broke off and fell to the ground, but it was caught in two younger trees on the way down, and this monstrous thing hangs precariously in the air, with much of the weight held up by its dead branches that fork the ground like legs. The two, much smaller, unfortunate trees which have been holding up the rest of the weight are strained and groaning under the mass. It is only a matter of time before gravity wins and the 3-foot thick, 10-foot long trunk come crashing down. So, I am careful to keep my distance.

Today I approached warily to look for interesting subjects to photograph. The first thing that caught my attention was an interesting insect egg case which looked similar to a praying mantis but wasn't the same...very fascinating! It was adhered to a pair of poison oak stems clinging to the main tree trunk. (I will show pictures of the case another day. :) After that, I continued peering around, looking at the branches, the trunk and the leaves. When I followed the main tree trunk down to the ground, I saw a patch of snow at the base of the main trunk. Then I did a double-take because I could hardly believe my eyes! Smack-dab in the middle of the snow was a mushroom poking a hole through and looking around! MY WISH WAS GRANTED!!

The fact of the matter is that I've been hoping to find exactly this sight since I began this project. I have a tiny, snow-capped mushroom that is actually my very first 365 image, but I have always wanted to find the opposite: a mushroom in a field of snow. And today I found it. It's a dream come true and I'm so happy I can hardly contain myself! :D (I am also including another picture to show the mushroom at a slightly different angle so you can see the hole it's poking through!)

When I worked my way around to the opposite side, and got the picture you see here, I saw a flash of beige on green and took a look: NO WAY! ANOTHER ONE!! On one of the branches that was holding up the massive trunk, a wee mushroom was growing in a sea of moss. HAPPY DAY!!! And in fact, there were even more mushrooms on the ground, but I already had pictures of these two and it would have taken a lot of work to clean up the area. More importantly, it would have meant spending a lot of time near this potentially deadly area, and there was no reason to put myself at risk. Literally, this trunk must weigh hundreds of pounds--and I don't want to be around when it falls!

James Russell Lowell (/ˈloʊəl/; February 22, 1819 – August 12, 1891) was an American Romantic poet, critic, editor, and diplomat. He is associated with the Fireside Poets, a group of New England writers who were among the first American poets who rivaled the popularity of British poets. These poets usually used conventional forms and meters in their poetry, making them suitable for families entertaining at their fireside. Wikipedia: James Russell Lowell

Penny
Its like a chocolate mushroom!!
6 years ago. | Permalink

And yes, you may find what you wish, when waiting long enough =)
6 years ago. | Permalink

Ms.Wisteria
I love the 'shroom but the snow looks wonderful. :)
6 years ago. | Permalink

Jenny McIntyre club
Brilliant and I love the little inset showing him in the snow. A very hardy mushroom indeed and it looks as if it's just poked through - because it's flesh looks very new.
6 years ago. | Permalink

Diana (Naturegrl64)
A mushroom pushing through snow - I can't believe it! Amazing find!
6 years ago. | Permalink

Rambonp
My choice main and last the best !
6 years ago. | Permalink

Gerlinde
frosty for the mushroom :) a wonderful find!
6 years ago. | Permalink

Shuttering Yukon club
woa girl, I would never expect your snow to stick around for that long... I love the moss mushroom!
6 years ago. | Permalink

Wierd Folkersma club
Very nice with all the ice around
6 years ago. | Permalink