351/365: "The ladder of success is best climbed by stepping on the rungs of opportunity." ~ Ayn Rand 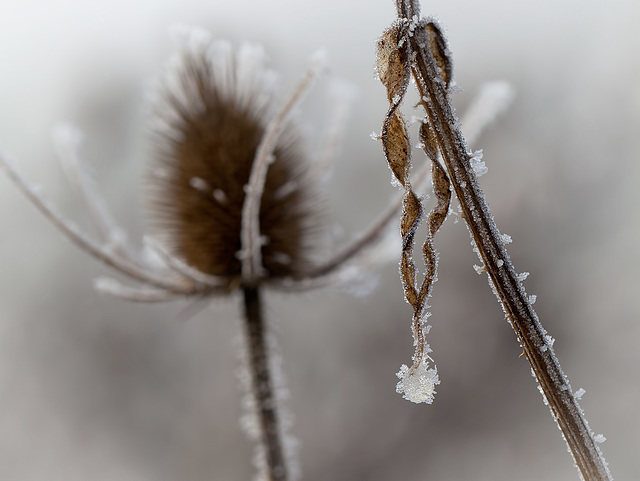 I went out today feeling rushed and frustrated, not in the mood to look for pictures, but knowing there was something special going on outside. Things were frosty...but...everything was extra white, and that spelled something different. I was right. The frost was particularly long and extremely fine, which you can just see on the droplet and leaves. I spent more time than I could afford taking pictures because this was a rare frost and I wanted to capture it in as many images as I could to process later. I'm really glad I did because I found some very cool and amazing sights!

This frost-covered droplet is dangling from the curled, dried leaves of a teasel plant. Amazingly, I was able to get the frosty droplet and leaves in perfect focus with a teasel dropping away into bokeh behind! For me, that's insanely lucky, because something usually always messes up that kind of an attempt. But today, everything lined up just right! :)

Ayn Rand (born Alisa Zinov'yevna Rosenbaum; February 2,1905 – March 6, 1982) was an American novelist, philosopher, playwright, and screenwriter. She is known for her two best-selling novels, The Fountainhead and Atlas Shrugged, and for developing a philosophical system she called Objectivism. Born and educated in Russia, Rand moved to the United States in 1926. She had a play produced on Broadway in 1935–1936. After two early novels that were initially unsuccessful in America, she achieved fame with her 1943 novel, The Fountainhead. Wikipedia: Ayn Rand

Chrissy club
WOOOOOOW this is such a beautiful capture. I love the different forms and the curls of course
6 years ago. | Permalink

Sami Serola club
I so know what you are talking about, Janet! Sometimes there are all too many wonderful pictures taken, but no time to share them.
6 years ago. | Permalink

Jenny McIntyre club
Oh Janet this is such a gorgeous photo. If there are more OOOHS, AAAHS etc to come - I can hardly wait. The effect is just stunning.
6 years ago. | Permalink

Keith Burton club
What a brilliant find..............and a spot-on capture! It looks like someone has hung a sparkly bracelet over the stem!
6 years ago. | Permalink

Dave Linscheid
The beauty of frost at it's finest. Your one is a winner!
6 years ago. | Permalink

Shuttering Yukon club
ahh frost... such a beautiful thing... in the right place!
6 years ago. | Permalink

Elizabeth Roberts
Beautiful capture of the frost on the leaves.
6 years ago. | Permalink

Colin
A lovely shot Janet , I hope you have a wonderful Christmas and all the best for the New Year , thanks for all you have done for the groups

Your beautiful pastel image was viewed and appreciated!

Stormlizard club
A beautiful shot of this Frosted Teasle"
6 years ago. | Permalink

Ken Dies club
Great bokeh. I hope you and Steve have a wonderful Christmas and a happy New Year.
6 years ago. | Permalink

Ayn Rand "Atlas Shrugged" was a live enhancing book for me when I was 15
6 years ago. | Permalink