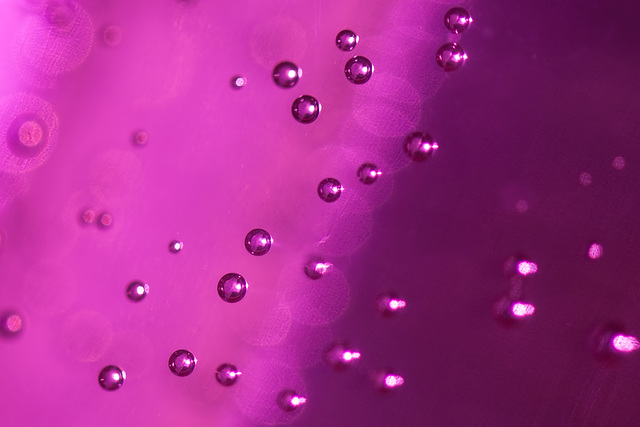 First of all, thank you EVERYONE for all of your wonderful comments!! You don't know how wonderful it feels to read the nice things you have to say! :) Also, I have to giggle because I knew you guys would be teasing me about the temperature and I absolutely love it! I don't know how those of you who've mentioned can LIVE in sub-zero climates, HOLY COW!! You're all crazy! :D *big hugs* Also, I wanted to say that I'm in the middle of a project right now and haven't been able to comment, which is making me nuts, but I'm hoping to get some time soon so I can come and visit each of you. :)

As for me, I decided to take pictures inside today!! It was actually warm and balmy at 17 to 25 degrees today, but I saw my pink double-walled water cup on the counter with tiny bubbles sticking to the sides and thought, PICTURE OF THE DAY!! I had a great time taking pictures...sometimes there's nothing more enjoyable than a good abstract! After playing with the plastic cup, I saw a glass vase nearby with tiny bubbles too, and had more fun with that one. (Later I did go out and I got a bunch of very cool frost pictures but I didn't want to process them today. Something for another day! :)

Jean Toomer (December 26, 1894 – March 30, 1967) was an American poet and novelist and an important figure of the Harlem Renaissance. His first book Cane, published in 1923, is considered by many his most significant. Wikipedia: Jean Toomer

Goia, , TKJ1966, and 13 other people have particularly liked this photo

This is just lovely. The color is great and the bubbles are perfect. I´m sure I have a similar picture in my big blackbox of chaos. I will try to find it and share if it is good enough. cu soon
8 years ago. | Permalink

A nice little bubbly abstract. Nice focus and colours. Temperatures outdoors of 17 to 25 are acceptable - as long as they're in Celsius. :)
8 years ago. | Permalink

Great image, Janet. The colour is superb and those little bubbles are excellent.
Enjoy your day.
8 years ago. | Permalink

Back from my trip and here to wish you a wonderful day.

...and beauty goes on in this site....so lovely and fantastic shot!
Just love it, and the words too.
8 years ago. | Permalink

This is gorgeous Janet and don't worry about not being able to pop over and comment, you have to take these gorgeous photos for us!!!!
8 years ago. | Permalink

Beautiful bubble magic. Pictures all around us!
8 years ago. Translate | Permalink

The secret of "getting used to cold climate" is in layered clothing and natural materials used like cotton and wool. Moreover, good warm shoes and gloves are surprisingly important. It is amazing how dry feet makes one feel much warmer altogether.

The idea of wearing clothes in layers is to make sure there are also thin layers of air in between, which is also the best insulation. That is the very same idea as used on windows. Here in Finland we have so called "triple glass" used on windows. First there is thermal glass, and then single glass approximately few inches outside of it. That extra glass stops the wind and draft. A very same idea one should use in clothing: Wind stopper outside, and then layers inside to get thin layers of air for insulation.

EDIT: By the way. Here in Finland it is not uncommon to see someone riding a bicycle in zero degrees Fahrenheit. Now that is what I would call crazy! =D
8 years ago. | Permalink

Nice one.
8 years ago. Translate | Permalink