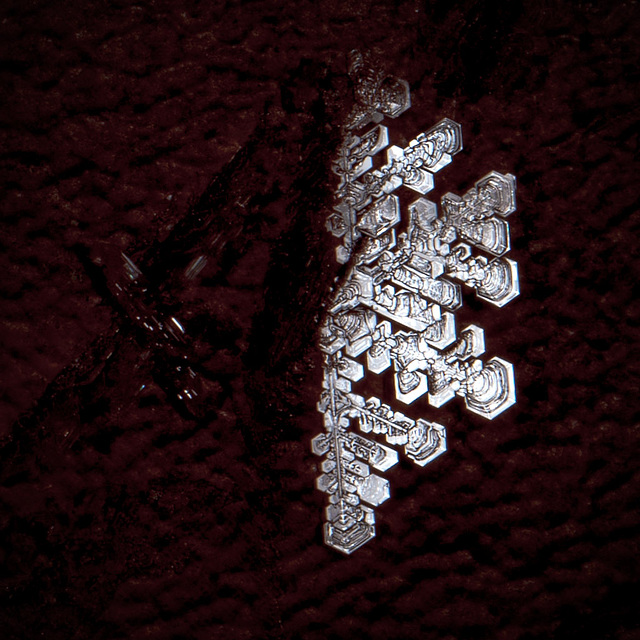 Today marks the coldest day that I've ever experienced in a place where I live: 7°F degrees!!! That is so incredibly cold it's hard for me to understand...so I went outside because I needed to fill the bird feeders and in so doing, I had to lift the feeder off the metal pole...and I held the pole for just about 5 seconds. After about two seconds it felt like I was touching a hot iron!! WOW!! We have two bird feeders, so I used one hand for each pole, and then I shook my tail back into the house, yike-yiking all the way to the hot water to warm my freezing hands! :D :D HOLY COW THAT'S COLD!!!

Always the glutton for punishment, I noticed that the frost formations were just AMAZING, so...once my fingers warmed up, I got my camera, put on my boots again, and out I went to capture frost crystals! :D

This one is my favorite because it was a mistake. I was taking a picture of a different area and the flash illuminated this frost flake beautifully, showing how it grew out of the vinyl cover we have on our spa. I didn't realize they can form this way, isn't it fascinating?! (By the way, this is the same surface as the next picture...instead of being medium brown, it's burgundy, which I pushed closer to black to help pop the "frost-flake" out :)

We have been down in the minus's this past week... I have 11 feeders... and then the water..and the food out for the idiot neighbours barn cats...Then take the dogs out. Not wearing gloves isnt an option !!!
8 years ago. | Permalink

And yes, I'm familiar with some production of Mapplethorpe. Good motto from him.
8 years ago. | Permalink

That is mind-blowing! It's so absolutely beautiful and intricate!!
8 years ago. | Permalink

Janet, that's -14C, no wonder the metal felt like hot iron! As Pam J said, gloves are not an option at those temperatures: a little moisture and your hands could adhere to the cold metal. Now I've given my 'grandfather' speech, this is a superb photo of the ice crystals.
8 years ago. | Permalink

Thanks for sharing this fantastic nature image! Well done!
Seen in The World of Nature
8 years ago. | Permalink

Oh my goodness...this is just absolutely FABULOUS and EXTRAORDINARY!!! I have tried this so many times but could never get a snow cristal as fantastic as yours. I LOVE THIS!!! We have +5 C...doesn't look like snow and ice at all.

Beautiful Work!!
Seen in
The Artisan!!
8 years ago. | Permalink

Absolutely stunning Janet. I've never seen anything like this before. You are so good at this macro stuff - you should definitely offer your pictures to the National Geographical Society, they would love to use some I'm sure.
8 years ago. | Permalink

This is a great macro photography
8 years ago. | Permalink

Beautiful.... Looks like it's made of platinum =)
8 years ago. Translate | Permalink

Well, -14°C is cold, but not that cold...
And mostly it matters at the humidity how cold it feeling, not by the real temperature. At longer cold periods we have similar temps here, but mostly they are around 0°C or slightly below, at around -5°C because of the ocean-weather. Well, if it´s foggy -14°C can really hurt, but in dry conditions it´s just great. :) But as such structures will apply mostly at wet conditions it have to be feeling cold I imagine. :) But I wondering that you can see such art, mostly they are formed if the temp is around 0°C - if it´s colder here we don´t see such nice stars.

I prefer BTW your second PiP which shown the whole area instead of just a single icebloom.
8 years ago. | Permalink

That's very nice, specially the way the light has caught part of it to show the details.
8 years ago. | Permalink

An excellent shot with incredible detail
8 years ago. Translate | Permalink