341/365: "There is no definition of beauty, but when you can see someone's spirit coming through, something unexplainable, that's beautiful to me." ~ Liv Tyler 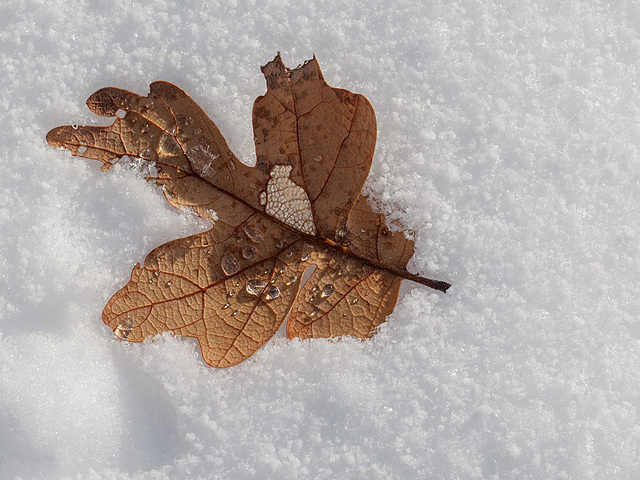 We didn't get any new snow, but it's so cold that none of it melted, so I spent some time walking around our meadow looking for some fun pictures!

I found this leaf laying in the snow just as the upper forest begins at the base of our hill to the ridge. One look was all it took for me to say, "Picture of the Day!"

Liv Rundgren Tyler (born Liv Rundgren; July 1, 1977) is an American actress and model. She is the daughter of Aerosmith's lead singer, Steven Tyler, and model Bebe Buell. Tyler began a career in modeling at the age of 14 but, after less than a year, she decided to focus on acting. After her film debut Silent Fall (1994), she appeared in supporting roles in Empire Records (1995), Heavy (1996) and That Thing You Do! (1996). Tyler later achieved critical recognition in the leading role in Stealing Beauty (1996). She followed this by starring in supporting roles including Inventing the Abbotts (1997) and Cookie's Fortune (1999). Wikipedia: Liv Tyler

Now when you go walk your dog and make your beautiful photos, you can put on your snowshoes!
7 years ago. | Permalink

Wish you a nice Sunday.
7 years ago. Translate | Permalink

Beautiful... and those droplets !!!
7 years ago. | Permalink

Such a lovely contrast!
7 years ago. Translate | Permalink

Yes! Just as Peggy said, notice the water drops. Enough heat from the sun to melt the snow on a dark leaf.
7 years ago. | Permalink

Such a delicate photograph!
7 years ago. Translate | Permalink

Seen through your eyes in: I ♥ Nature
Thanks for posting in our group !
7 years ago. | Permalink

Amazing picture here. The snow looks like sugar and the structure of the leaf is magnificant. I love the texture of the leaf and how it's showing it's various stages of dying.
7 years ago. | Permalink

Great photos of the day.
7 years ago. | Permalink

I'd commented on this before, but I can't find it. Anyway this is a fantastic photo Janet. I just love the texture on the leaf, showing it's varying degrees of dying, and the snow looks like fine sugar absolutely gorgeous.
7 years ago. | Permalink

A marvelous shot, Janet! I particularly like the section "skeletonized" by insects. Nice idea and shot!

Thanks for sharing this world class image! Your work is a true masterpiece!
Seen in The Masters of Photography
7 years ago. | Permalink