339/365: "Enthusiasm is the yeast that makes your hopes shine to the stars. Enthusiasm is the sparkle in your eyes, the swing in your gait. The grip of your hand, the irresistible surge of will and energy to execute your ideas." ~ Henry Ford 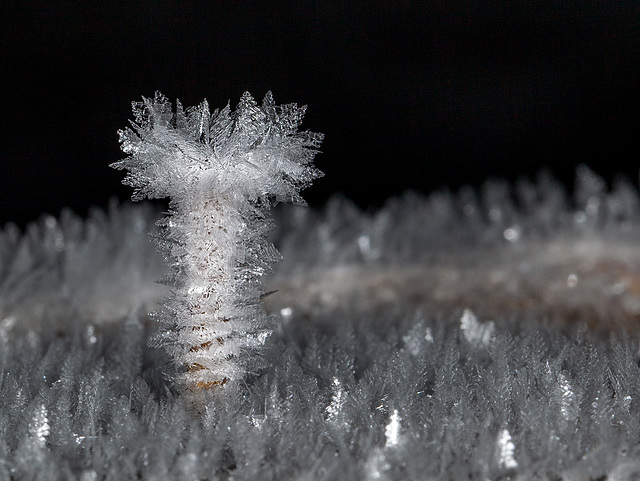 The weather forecast said it would be cold this morning. REALLY COLD. They were right!! It was 14.5°F when we got up, and it was all I could do to force myself out the door into nature's freezer! But I simply HAD to see what happened to the frost when it was that cold, so I bundled up like little Randy in "A Christmas Story" and out I went with Molly at my side. She couldn't be happier in her thick double coat and had a grand time frolicking about while I marveled at the world around me. At first I didn't see anything all that special, but then I saw some boards with screws in them and could hardly believe my eyes!! The frost looked like miniature Christmas trees! So huge and detailed!!

I knew I had only about 15 minutes before I would be forced to get back inside, but in the end, I refused to go back for 30 minutes because I was enjoying the beautiful frosty sights so much! I found many "furry" screws like the one above, frosty planks, twigs, and leaves. and even I found a mushroom in the grass that was looked like it was covered in diamonds! I saw so many cool frosty things that by the time I got back to the house, I was very glad that I forced myself to go out into the cold! You all would be snorting in laughter to see me sticking my feet, one at a time, into a hot sink of water to get the feeling back into my toes! :D :D Too funny!! :D

Henry Ford (July 30, 1863 – April 7, 1947) was an American industrialist, the founder of the Ford Motor Company, and sponsor of the development of the assembly line technique of mass production. Contrary to popular belief, Ford did not invent the automobile nor did he invent the assembly line. Ford however was the first to develop and manufacture the first automobile that many middle class Americans could afford to buy. In doing so, Ford converted the automobile from a relatively unknown invention into an innovation that would profoundly impact the landscape of the twentieth century. His introduction of the Model T automobile revolutionized transportation and American industry. As owner of the Ford Motor Company, he became one of the richest and best-known people in the world. He is credited with "Fordism": mass production of inexpensive goods coupled with high wages for workers. Ford had a global vision, with consumerism as the key to peace. His intense commitment to systematically lowering costs resulted in many technical and business innovations, including a franchise system that put dealerships throughout most of North America and in major cities on six continents. Ford left most of his vast wealth to the Ford Foundation and arranged for his family to control the company permanently. Wiki: Henry Ford

* ઇઉ *, Luc Reiniche, Ramon Hierro, and 48 other people have particularly liked this photo

Suggested groups:
26 comments - The latest ones

it's worth braving the cold to take a picture so beautiful, it looks like a girlande christmas!
8 years ago. | Permalink

And the crystalline structure in the 2nd inset........ OHHHHHH MMMMMMMMMYYYYYYYY !!!!!!

Oh, it is a screw! =D What a marvelous discovery! And now it starts to be cold, even I admit it. But as Norwegians used to say, there is no bad weather, only bad clothing =P
8 years ago. | Permalink

Just like tinsel!! A dazzling image.
8 years ago. | Permalink

Looks like a beautiful flower
8 years ago. Translate | Permalink

WOOOOOOW Wintwerwonderland! Look at the perfect ice-crystals *****
8 years ago. | Permalink

This is an absolute stunner. The frost is a wonderful thing to capture and I never thought about screws etc. I did have a load of frost pictures when we had a hoar frost in 2010. I just have to wait now for the really cold days to get some pictures. Thank you Janet for such incredible pictures.
8 years ago. | Permalink

Amazing..................the frost has turned a simple object into a work of art and you've captured it perfectly in such stunning detail. A great find and well worth freezing your toes off for!!
8 years ago. | Permalink

That is totally amazing, Janet. Outstanding shot.
8 years ago. | Permalink

You have got some lovely frost there!
8 years ago. | Permalink

Great macro of the frost with all the little crystals. You said it was cold at your place this morning at 14.5 F . Janet if you want cold come to my house, it was - 40.5 F this morning. Wife and I went for a long walk and took some hoar frost photos ( posted on my site) It was cold this morning but if you dress warm it is not all that bad. It was a beautiful sunny day.
8 years ago. | Permalink

Great find----it looks like a palm tree in a forest :o) Magical....
8 years ago. Translate | Permalink

This so amazingly pretty....I love it. I also hope you have warmed up now :D
8 years ago. | Permalink

Thanks for sharing this world class image! Your work is a true masterpiece!
Seen in The Masters of Photography
8 years ago. | Permalink

That would have to be the best photo of ice crystals I've seen. An excellent macro which really brings back memories of colder times and places. :)
8 years ago. | Permalink