336/365: "Happiness is the meaning and the purpose of life, the whole aim and end of human existence" ~ Aristotle 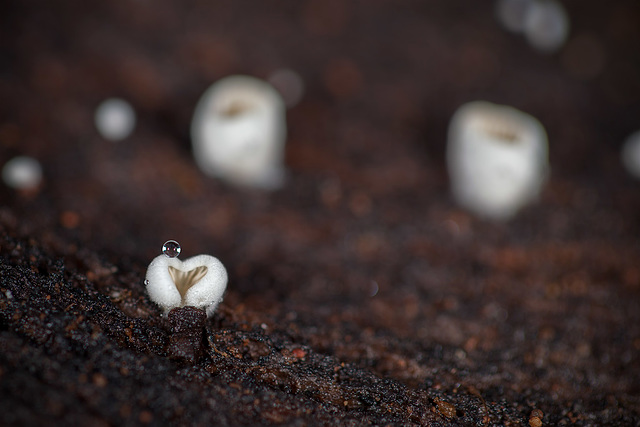 It rained most of the day but I kept checking to see if it stopped, and finally it did, if just for a short time. I left the house without the dogs because I didn't want to spend 20 minutes drying them and wiping off mud! And since I was off on my own, I made a bee line for the lower forest, since I won't take the dogs because there's no fence to the main road.

As I left the house, I knew it was windy, but I didn't realize that stray droplets were coming down and spraying everywhere, so I ran inside to get a plastic bag to cover my camera while I crossed the smaller meadow, bracing myself against the chilly draft. Immediately upon entering the dark and moist lower forest, the wind dropped down to a slight breeze, and I was comfortable again. Ah, macro heaven! Where do I look first?!! :D

I immediately began finding little mushrooms, but they were buried in leaves and were too much work to excavate, so I moved on. I found some beautiful moss-covered stumps with wonderful sporophytes and pretty lichen. Then I found some beautiful Orange Jelly fungus and some itty bitty baby shelf fungus, and also some interesting white fungus that looked like rows of molar teeth! FASCINATING! I took pictures as I went along, and then arrived at a favorite area with many rotten logs and plates of bark. Everything was bristling with tiny fungus, moss, and lichen species, and when I found a large chunk of bark, I dropped down onto my knee pads and carefully turned it over.

"OHHHHHHH!!! Look at all the little white mushrooms!!! WOW!!! SO AMAZING!!! All over one section of this bark were dozens of extremely tiny shell-shaped mushrooms in various stages of development. I spent moments slowly gazing at all of them without my glasses, delighted at this stunning microscopic show I was able to enjoy.

I noticed that many had miniscule, period-sized dew drops on them, and suddenly I found a droplet on the edge of an absolutely perfect, heart-shaped mushroom! Happily, I took many pictures from various angles and apertures, hoping I'd get that impossibly tiny droplet in focus. When I got back to the house, I discovered that only a few were in focus, but to my delight, the one I was most hoping for was exactly right!! HOORAY!!! :D

Aristotle (384 BC – 322 BC)was a Greek philosopher and polymath, a student of Plato and teacher of Alexander the Great. His writings cover many subjects, including physics, metaphysics, poetry, theater, music, logic, rhetoric, linguistics, politics, government, ethics, biology, and zoology. Together with Plato and Socrates (Plato's teacher), Aristotle is one of the most important founding figures in Western philosophy. Aristotle's writings were the first to create a comprehensive system of Western philosophy, encompassing morality, aesthetics, logic, science, politics, and metaphysics. Wikipedia: Aristotle

A wonderful image, especially with the little water drop shining on top! What a wonderfully productive woodland you have!
8 years ago. | Permalink

These are amazing, Janet. So tiny but so beautiful. And those little droplets are like sparkling diamonds. Great work!
8 years ago. | Permalink

You've done it again Janet - an amazing capture of a teeny tiny thing that we would never know about let alone see. Thanks
8 years ago. | Permalink

well, I gotta say, those are pretty awesome shrooms!
8 years ago. | Permalink

Marvellous capture of that tiny droplet on the tiny fungus. Also the larger molars in the bokeh.
8 years ago. | Permalink