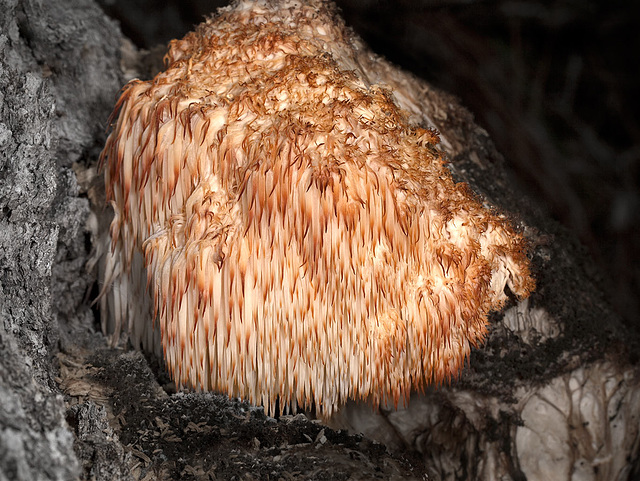 6 more pictures and many educational notes from Wiki above ! :)

When you have a macro lens, an acre is more like a mile or more, so there are many possibilities to discover as I amble along. First I found some interesting shelf fungus. Then some strange orange-brown fungus that was very interesting to look at. Keeping an eye on the dogs, I saw Moosey chewing on a stick and Molly and Zoe investigating something terribly intriguing to them. :D Half way up the hill I found a wooden surveyor's stake laying on the ground, and when I carefully turned it over, I found a wonderful brown spider with a lovely furry abdomen! Making my way around a tree I remembered a year ago, I looked down and found a rock encrusted with clear and white quartz crystals! FUN!! Moving up the hill, I saw a rotten oak tree and noticed something large at the base, and it looked suspiciously like fungus. Creeping closer, I gasped in delight. A FUNGUS ON MY BUCKET LIST!!! HOORAY!!!! I had found a Bearded Tooth Fungus!!!! SO COOL!!!! (You can read more about this fungus in notes on the picture above!)

The fungus was a group of three clumps, taking up the space of about two feet. Each clump was about 1 foot in diameter (one of them overlapped another) Funny enough, I spent about 10 minutes excavating the lowest one because I could photograph it more by itself, but when I took pictures of this second one, which is attached to the oak tree at the left, I realized that this one was much prettier and better to show. It's actually a good thing I found these today, because they are showing age and damage from the frost, but are still in fine condition for a picture to share! :) (I also have a close-up as an inset, so interesting to look at!)

By the way, something surprising happened while I was cleaning up the area for my picture. I heard a heavy "WHOMP" sound next to me, and I looked up to see a large bird which was very surprised to see me. Before I focused on the bird, it immediately took off and flew over to a tree within sight, landing on the side and identifying itself as a woodpecker of some type. The thing is, I'd never SEEN such a HUGE woodpecker before! I only saw a flash of red on its head and its slate grey back but when I got back home, I found that what I had seen was a Pileated Woodpecker!! I really had no idea that a woodpeckers could be so big, what I saw was even larger than a Northern Flicker! (Pileated Woodpecker: 16-19", Northern Flicker: 11-14"). What's also interesting is that the fungus was covered with chunks of rotten wood ripped out of the tree and it appeared to be recently dug out. I'd actually looked around to see if there were any signs of what might have been doing the digging...and what do you know?! I found the source! I only hope that my presence didn't make it leave for another possible home. I left as soon as I got my pictures taken, so hopefully it came back to finish working on its now abode.

A proverb (from Latin: proverbium) is a simple and concrete saying, popularly known and repeated, that expresses a truth based on common sense or the practical experience of humanity. They are often metaphorical. A proverb that describes a basic rule of conduct may also be known as a maxim. Proverbs are often borrowed from similar languages and cultures, and sometimes come down to the present through more than one language. Both the Bible (including, but not limited to the Book of Proverbs) and medieval Latin (aided by the work of Erasmus) have played a considerable role in distributing proverbs across Europe. Mieder has concluded that cultures that treat the Bible as their "major spiritual book contain between three hundred and five hundred proverbs that stem from the Bible."[1] However, almost every culture has examples of its own unique proverbs. Proverbs

, TKJ1966, Chrissy, Don Sutherland and 21 other people have particularly liked this photo

A fun and original series, with comments as always well done.
8 years ago. | Permalink

These are very rare in the Netherland, great find and beautifully photographed!
8 years ago. | Permalink

A remarkable fungus. There must be a lot of fungus around your area I've never seen one like this before!
8 years ago. | Permalink

An awesome job .. I love what you do.
Good Saturday.
8 years ago. | Permalink

I admire your talent to see and work with your Pictures! Wonderful title and thanks for the text ;-)
Have e good weekend.
8 years ago. | Permalink

great series and a fab fungus, have not seen one like that before.
8 years ago. | Permalink

Have an enjoyable weekend !
8 years ago. | Permalink

I've never seen anything remotely like this - I don't think we have it over here. You have found some amazing fungi in and around where you live. Thanks for sharing them with us.
8 years ago. | Permalink

Thank you again for sharing such a wonderful stories, scientific facts, and of course the pictures. One easily gets the feeling that you must enjoy writing and photography. Taking a picture every day is just an easy part, but to write also such enjoyable stories every day is amazing! I suppose you are also writing books, or at least you should.
8 years ago. | Permalink

Strange mushroom !
... but extremely useful, as I understood ....
8 years ago. | Permalink

The Pileated ! I have one that visits.. hansome boy !

The painting prog.. I use the Corel Paint version.. its fun !
8 years ago. | Permalink

What a strange 'shroom!!! At first I thought it was some sort of anemone... Great find and shot =)
8 years ago. | Permalink

Fantastic! Another natures wonder perfectly capture by Janet. LOOOOOVE it
8 years ago. | Permalink