330/365: "I would rather be adorned by beauty of character than jewels. Jewels are the gift of fortune, while character comes from within." ~ Titus Maccius Plautus 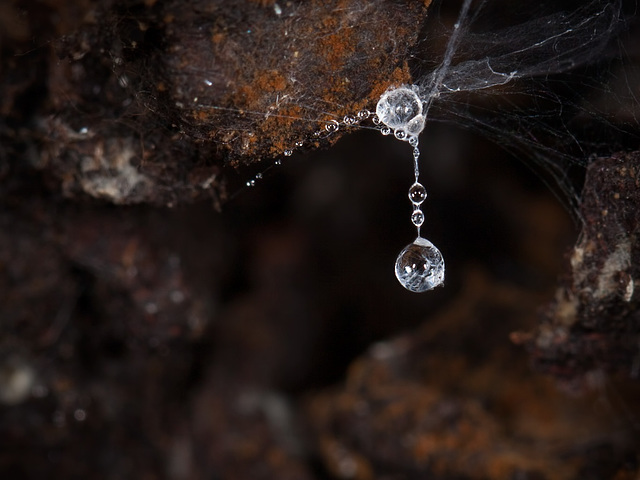 Today I decided to explore a bit of the side of our hill that leads up to our ridge line. This area is many acres in size and yet, I have rarely wandered through it. Other than the trail leading straight up the hill to the top, there are no other proper trails, but the deer trails are very helpful, leading me around the countless thickets of bushes and dead trees with their grabbing branches. Sadly, the dogs didn't go because I wanted to concentrate on exploring this place and not keeping an eye on dogs.

Before I entered the forest on the hill, I came to a thistle plant, which was covered with seeds about to fly away on their parachutes. I captured some images and got very lucky when one flew away while I was taking pictures! As I wandered up and into the forest, I studied branches and took pictures of many kinds of interesting lichen. Under one log I discovered two wonderful prizes: the droplets of water above which are trapped in spider web--don't they look like a beautiful earring?!--and when I was pulling away some leaves, I discovered a tiny mushroom, which I'm also sharing tonight! :) On my adventure I also found an interesting spider, a beautiful wasp gall, a baby centipede, a cool little beetle running over madrone bark, some beautiful droplets bristling on a blade of grass, and a very special find: I discovered a lichen just like the British Soldier lichen I shared the other day but instead of being red on top, it's black! I want to take more pictures before I share these--the ones I got today are crisp but I want less clutter! :)

Titus Maccius Plautus (c. 254–184 BC), commonly known as "Plautus", was a Roman playwright of the Old Latin period. His comedies are the earliest surviving intact works in Latin literature. He wrote Palliata comoedia, the genre devised by the innovator of Latin literature, Livius Andronicus. The word Plautine refers to both Plautus's own works and works similar to or influenced by his. Wikipedia: Titus Maccius Plautus

, TKJ1966, , and 45 other people have particularly liked this photo

Suggested groups:
38 comments - The latest ones

Oh you are good at this kind of close-up and macro photography, Janet =) Well done, all of them! I see I have a lot to learn from you, and not just photography, but also story telling.

Love the seedheads too.
8 years ago. | Permalink

This is quite spectacular! More beautiful than an earring although it does look like one alright!
8 years ago. | Permalink

Your pictures are a miracle!
8 years ago. Translate | Permalink

it is like a diamond..
8 years ago. Translate | Permalink

Wow Janet your pictures are so incredible. This is such a wonderful photograph
8 years ago. | Permalink

What wonderful focus this trio display. I think the thistle floret is my favourite.
8 years ago. | Permalink

Congrat, you are a great photograph, Janet.
8 years ago. | Permalink

Group: The Artisan
8 years ago. | Permalink

Great find, nicely captured! Like the quote, too =}
8 years ago. | Permalink

into the small world... nice.
8 years ago. | Permalink