329/365: "It's the cursed cold, and it's got right hold, till I'm chilled clean through to the bone." ~ The Cremation of Sam McGee by Robert Service 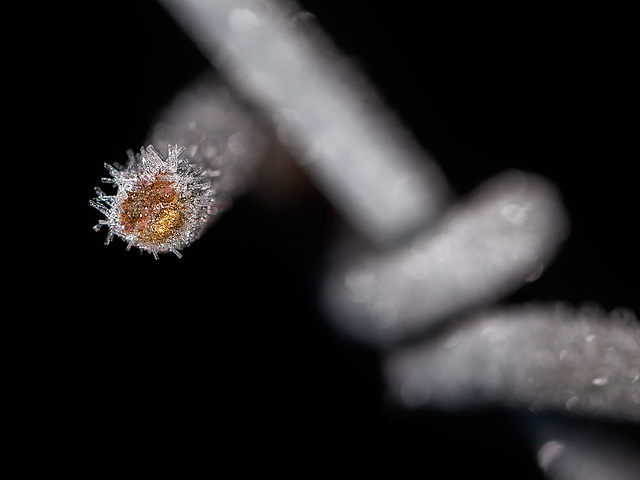 The forecast last night said it would be cold this morning...they weren't kidding! When I went down to the gate at 7am to open and close the gate for Steve as he left for work, it was 27°F (-2.8°C)!! We stepped outside and the cold just hit me in the face. WOW, take a step back, Jack Frost, you're freezing my face with that frosty breath of yours!!

I was bristling with sweaters and a coat, warm socks, hat, boots, gloves, and I had my camera with me too as I waved goodbye to Steve. I wanted to get some images of frost while I was down by the fence that borders the main road. However, I also knew I didn't have much time, because no matter how bundled up I was, that cold would find its way in through my worst defenses: my gloves and rubber boots. Knowing the clock was ticking, I quickly went to the fence and started snapping away, admiring the amazing crystals on the barbed wire along the top of the fence as I moved this way and that. Soon, my fingers started to tell me they were cold. Then I noticed the frosty pine needles on the Ponderosa Pine tree nearby and challenged myself to try for some good dof images. (Fail!) Looking down I saw pine cones with frosty edges and managed to get some nice pictures (I'll share that picture in the next few days!). At that point, my fingers were really beginning to hurt and my toes were beginning to yell. Making my way back up the drive way I stopped to take pictures of frosted gravel (I got a really great picture but...the gravel looks too much like...frosted doggy doo...*cackle*...so I can't use it! :D), and on the way I couldn't resist a few more pictures of frosted barbed wire, and then I couldn't stand it anymore and rushed up the hill and into the house, and got my hands under hot water to warm them up again...I can't believe it. I was out there for TEN MINUTES and my body was screaming from the cold!! Unbelievable!! It took a long, hot shower to completely warm up again. Totally crazy cold out there!!!

Robert William Service (January 16, 1874 – September 11, 1958) was a poet and writer who has often been called "the Bard of the Yukon". Service is best known for his poems "The Shooting of Dan McGrew" and "The Cremation of Sam McGee", from his first book, Songs of a Sourdough (1907; also published as The Spell of the Yukon and Other Verses). "These humorous tales in verse were considered doggerel by the literary set, yet remain extremely popular to this day." Wikipedia: Robert Service

Berny, Heidiho, , and 43 other people have particularly liked this photo

I think the passion for photography has made you forget the cold.
Bravo, having to brave the cold to give us this beautiful picture! The result was worth it.
In any case, I do not know if I would have had your courage, I do not think because I do not like the cold except ski!
8 years ago. | Permalink

I very much enjoy the stories you include! I suppose you used some flash to get the background black. Well done.

EDIT: And there it is said on EXIF =D "Flash: On, Fired"
8 years ago. | Permalink
Janet Brien club
has replied to Sami Serola (inactiv… club

Frost does produce some lovely image. It's just a pity it's so cold!
This is lovely, I love the warm colour surrounded by the tiny ice crystals. Well worth getting cold for!
Enjoy your day and stay warm.
8 years ago. | Permalink

What a great find and shot idea, Janet! Your sharp, specific focus is super, as is your overall composition. Thanks so much for your kind words. My wife is indeed the most beautiful part of my life, and I always share beauty when I can! (Not to mention that she's also the better photographer in the family!)
8 years ago. | Permalink

Me again, still lovin' it!
www.ipernity.com/group/374135
8 years ago. Translate | Permalink

seen and ADMIRED in Earth Tones
8 years ago. | Permalink

This is absolutely fantastic. You have managed to create a beautiful picture out of a rusty end of a barbed wire on a freezing morning. I know it hurt you to be out there taking the pictures, but it's great for us.
8 years ago. | Permalink

It has definitely paid off! The pictures are super nice. The ice crystals on the cold metal look great.
8 years ago. | Permalink

Stunning composition, Janet.
Amazing lighting.
I love it, very much.
8 years ago. | Permalink

thats an outstanding macro, Janet!! - love all the details of the ice crystals!!
8 years ago. | Permalink

Well worth braving the cold for Janet (says he, sitting in a lovely warm room)!! Once again, the dof is spot on as is the focus point and detail.

Often, in macro work, composition comes a poor second, but never with you. This is no exception!
8 years ago. | Permalink