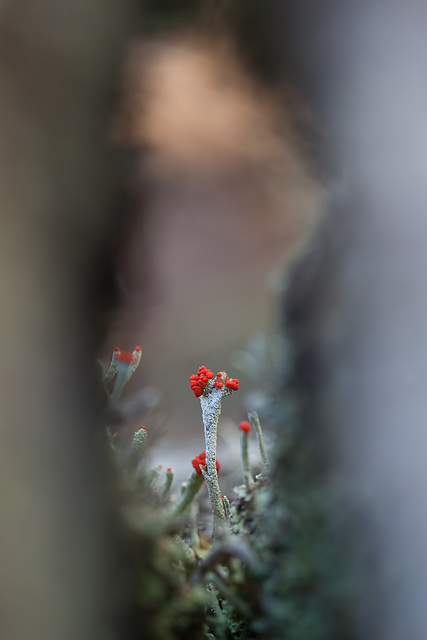 I left the dogs behind today because I wanted to go to the lower forest to look for mushrooms and other interesting subjects, but this area of our property is not fenced to the main road. I can't concentrate on both photography and the dogs at the same time and I will not risk their safety, so they had to stay at home.

Veering off into the darker part of the forest, I came to a stop at a very special log which I call "The British Soldier Log." On it grows a beautiful and tiny, red-tipped lichen that I have not found anywhere else on our property except on a log along the ridge line. I'll never forget how excited I was when I first found this lichen a couple of years ago. Who ever heard of red-tipped lichen before?!! SO COOL!!! :D

Since I had my macro flash on my camera, I knew I'd be able to get some good pictures, and I also had some time to spend, so I decided to really study this log carefully. I took off my glasses so that I was essentially blind, but for what I was doing, I could see better than most. I spent about 20 minutes looking very carefully all over this log to see what other treasures grew there. I found other groups of British Soldier Lichen that I hadn't seen before and many types of fungus and lichen, and I even found acorns that had been hammered into a tiny crack by some woodpeckers!

As I was looking around the log, I noticed a crack, which I peered through. On the other side, the perfect form of a beautiful British Soldier stared back at me! Grabbing my glasses and grinning broadly, I knew I had my Picture of the Day as I positioned my camera for a series of pictures!

Field Marshal William Joseph "Bill" Slim, 1st Viscount Slim (6 August 1891 – 14 December 1970) was a British military commander and the 13th Governor-General of Australia. He fought in both the First and Second world wars and was wounded in action three times. During World War II he led the 14th Army, the so-called "forgotten army" in the Burma campaign. From 1953 to 1959 he was Governor-General of Australia, regarded by many Australians as an authentic war hero who had fought with the Anzacs at Gallipoli. Wikipedia: William Slim (British Soldier)

My father fought under FM Bill Slim..and yes.. it was the Forgotten Army.. still is. Slim stood by his men first last amd always.. and he was never treated with the respect to the same degree that "other FM's" who were arrogant and self serving were.

Slim was worshipped by his men.. and they followed him not from command.. but from courage and honour and respect.
8 years ago. | Permalink

This is a prize winner if ever I saw one!! Just fantastic!
8 years ago. | Permalink

Seen and admired in:
Pictorials

This is a beautiful collection of images, Janet. I could fave every one. The main one is my favourite favourite but they're all lovely.
Careful when you take your glasses off in the woods - you'll walk into trees!!
Have a great week ahead.
8 years ago. | Permalink

Well done you for spotting this image and taking it so well. Thanks for the quote too. I couldn't agree more.
8 years ago. | Permalink

Yet again another stunning photograph. The crack in the wood makes a wonderful frame for this incredible picture. Well done.
8 years ago. | Permalink

Wonderful Janet - I love them all!
8 years ago. | Permalink

I just love your shot.
And also, what you bring about moral courage.
Simply fantastic.
8 years ago. | Permalink

Wonderful presentation and great serie :-) Thanks
8 years ago. | Permalink

A fantastic looking lichen and such an interesting story to go with it. Lovely series of shots. I haven't worked out how to put links to photos in the comment boxes yet :-) Congratulations on Explore.
Seen in Prime lenses.
8 years ago. | Permalink

The keyhole effect makes this other-worldly--well seen! I think I like the close-up best. Funny that the insert shows up larger than the full-size version. Sneaky way to get more screen space!
8 years ago. | Permalink

I like doing this framing too....
8 years ago. | Permalink

wonderful picture!
and astonishing how you remember a six and a half years old picture ;-))
23 months ago. | Permalink