Frosted Earthstar from Above 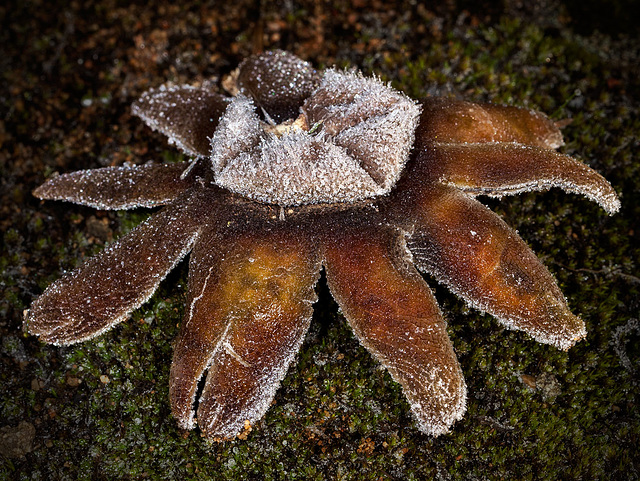 I thought it would be nice to share another angle of this beautiful earthstar. Isn't it interesting how leathery it appears? It is quite tough, actually! They are said to be edible, but nobody in their right might would, as it would be like chewing on a rubber tire! :D

Astraeus hygrometricus, commonly known as the hygroscopic earthstar, the barometer earthstar, or the false earthstar, is a species of fungus in the Diplocystaceae family. Young specimens resemble a puffball when young and unopened. In maturity, the mushroom displays the characteristic earthstar shape that is a result of the outer layer of fruit body tissue splitting open in a star-like manner. The false earthstar is an ectomycorrhizal species that grows in association with various trees, especially in sandy soils. A. hygrometricus has a cosmopolitan distribution, and is common in temperate and tropical regions. Its common names refer to the fact that it is hygroscopic (water-absorbing), and can open up its rays to expose the spore sac in response to increased humidity, and close them up again in drier conditions. The rays have an irregularly cracked surface, while the spore case is pale brown and smooth with an irregular slit or tear at the top. The gleba is white initially, but turns brown and powdery when the spores mature. The spores are reddish-brown, roughly spherical with minute warts, measuring 7.5–11 micrometers in diameter.

, , , and 10 other people have particularly liked this photo

WOOOOOW, hope to see one any time. sooooo beautiful
8 years ago. | Permalink

What a beautiful photo
8 years ago. | Permalink

Great photo of this Earthstar. They are hard to find fresh.
8 years ago. | Permalink

Sounds like eating our pukeko bird! This looks great with its frosting!
8 years ago. | Permalink