324/365: "Everyone can identify with a fragrant garden, with the beauty of a sunset, with the quiet of nature, with a warm and cozy cottage." ~ Thomas Kinkade 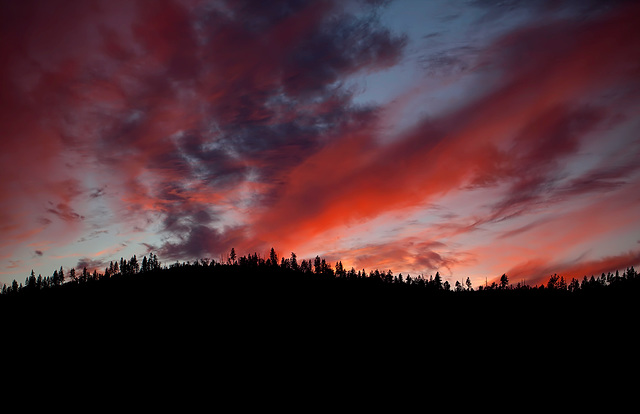 I planned to choose a mushroom image for my Picture of the Day, as I'd gone out this morning and gotten pictures of a bunch of different mushrooms. However, as the day was coming to an end, I looked outside and once again was overcome by an amazing sunset!

Then came the argument with myself:
"Oh, it's such a pretty sunset! I should take a picture!"
"No, I've got plenty of sunset pictures!"
"But it's so pinky-red and gorgeous!"
"People are going to get sick of my sunsets!"
"But this one is different!"
"Oh alright...I'd better hurry or I'll miss it!!"

Once again, I somehow managed to capture the most brilliant colors with my first picture, and each one after was less striking. The next picture I'm sharing this evening is the same sunset pointing to the south, showing dramatic clouds with a splash of color. It was taken a couple of minutes later... look at how the colors have faded! Still pretty, but it's not the same eye-popping color palette.

I've got one mushroom picture to share along with the other sunset image...wow, I'm really starting to pile up the mushroom images and I can't catch up with all the processing! Well, hopefully I'll be able to get them all done so you can see them as time permits! (Now is the time to start laughing...because I have some really neat mushroom pictures that I haven't gotten to...and they're from last spring!! Too many pictures, not enough time! :D)

Thomas Kinkade (January 19, 1958 – April 6, 2012) was an American painter of popular realistic, bucolic, and idyllic subjects. He is notable for the mass marketing of his work as printed reproductions and other licensed products via The Thomas Kinkade Company. He characterized himself as "Thomas Kinkade, Painter of Light," a phrase he protected through trademark but one originally attributed to the English master J.M.W. Turner (1775–1851). It is estimated that 1 in every 20 American homes owns a copy of one of his paintings. Wikipedia: Thomas Kinkade

Ramon Hierro, , , and 49 other people have particularly liked this photo

Suggested groups:
34 comments - The latest ones

Sunsets are irresistible - but its that lovely fungi that takes my eye :o)
8 years ago. | Permalink

Funny how often that happens. The first, sometimes snatched, shot is the best. Maybe there's a moral there!
A beautiful sunset captured so well here, Janet. The colour is so fiery - hope it didn't lead to bad weather!
Enjoy your day.
8 years ago. | Permalink

There's no right answer with sunsets, I've decided. Some just go on getting better, others fade so fast it's hard to believe. At least you caught this at its best: great shot.
8 years ago. | Permalink

Oh I take pictures of anything and everything - it doesn't even have to stand and pose to get photographed. That's the joy of this digital age isn't it, cos you can take loads and loads of photos and it doesn't cost you anything - well apart from the SDHC cards. I never throw any away neither, and must get another large pot to hold them all in. Don't ever NOT take photos, who cares what others think - I for one love sunsets and would never get tired of looking at them. This one is particularly gorgeous
8 years ago. | Permalink

absolutely fascinating sky, Janet. never get bored from sunsets.... they are always well worth watching and none is like another!
8 years ago. | Permalink

how can one get sick of such a lovely sunsets? I like the silhouettes of the trees. They are looking so tiny in front of the big sky.
8 years ago. | Permalink

Very beautiful colours in these clouds.
I just love (like a child), to imagine silhouettes and stories
Great capture, Janet.
8 years ago. | Permalink

Magnificent shot!! Great quote from one of my fav. artists, too =)
8 years ago. | Permalink

So beautiful. The trees look so tiny.
8 years ago. | Permalink

Saw an interesting art exhibit in Houston, where the corpse of Ronald McDonald was painted into a series of Thomas Kincaid prints--floating face down in an idyllic stream, stabbed in the chest in a pristine snow drift; &c. Social commentary, I guess.

Until Scout comes along, I guess we'll just have to look at Explore ourselves. Could be worse.
8 years ago. | Permalink

Oh wow!! this is so stunning!! I love the silhouette tree line and that sky is absolutely breathtakingly beautiful!!
8 years ago. | Permalink

A very beautiful sky capture, the colours are amazing
8 years ago. | Permalink

Wish you a nice week end, Janet.
8 years ago. | Permalink

seen in The Artistry of Mother Nature
8 years ago. | Permalink

forever is a long ti…