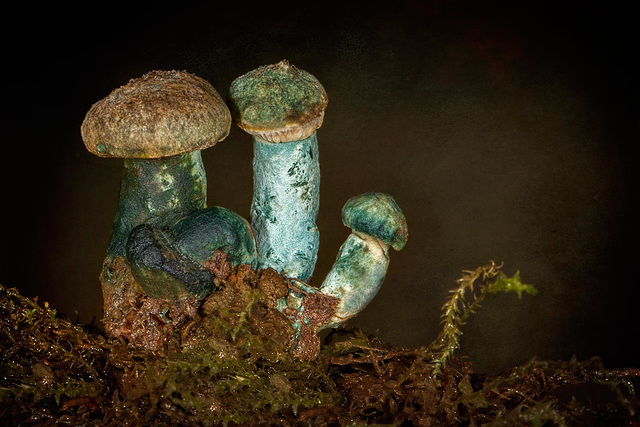 Yesterday I took the dogs out on a quick walk around the lower forest and as I walked, I looked to see if there were any new mushrooms. Holy cow, yes there were! I found some very large orange ones pushing their way up through leaves and moss and put those on my list for pictures today.

This morning I took the dogs with me down to where I found the mushrooms and began excavating them. They were quite large--caps about 4-5" in diameter, and I relaxed and took my time, carefully removing leaves, pine needles and moss. Because they were pretty low to the ground, I decided to carefully move some moss around them so I could take a better picture. As I moved the moss to the side and continued brushing dirt out of the way, I saw something blue in the dirt under the place where the moss had been. "Hmm, I wonder what that is?" I thought to myself as I leaned closer...and closer, and..."NO. NO WAY. BLUE MUSHROOMS!! I FOUND BLUE MUSHROOMS!!!! AHHHHHHHHHH!!!!!!" These are some of the most amazing fungus finds yet!!! HOORAY!!

Laying in the dirt, growing under the moss, were several small clumps of these blue-green mushrooms. They were covered with dirt and some of them were so impossibly tiny that I had to be very, very careful when attempting to pick them up. I was so excited that I wanted to stop what I was doing and run up to the house with my amazing find so I could take pictures. But I didn't. Instead, I finished clearing my "stage" for the orange mushrooms and took pictures of them. (I'll be sharing that picture in the next couple of days...I showed Steve and his response was, "WOW!!" so hopefully you will all like it too! :D)

Once I was pleased with my images of the orange mushrooms, I tucked the moss back around them and finally I carried the blue mushrooms back to the house. I was worried that the heat of my hand would affect them so I rolled them onto a bit of moss I had with me for "stage dressing".

I first took pictures without washing them off, in case water would hurt them somehow or make them even dirtier. Looking at the pictures, I had to laugh...flecks of dirt show up like boulders at macro scale...I needed to wash the dirt off! So, I took a spray bottle and gently spritzed each little group. The next set of pictures was possibly more awful because the water made the mushrooms look really gross! YUCK! So, I let some time pass, allowing the water to dry and I tried again. Success!

This group, if you can see, is four mushrooms--one of them grew in a folded-over position and is slightly buried in dirt. The tallest pair stand about .5 inches tall, or a bit more than 1 centimeter. What strange looking mushrooms! One of them that I didn't photograph had changed to a more tan color like the cap of the one on the left, and it was a bit larger, about .75" or just under 2 cm. (By the way, I added some light texturing to the background to give this image more depth)

I have a friend, Ken Dies who's very experienced with mushrooms, and he explained that these mushrooms are not actually blue or green. They have been attacked by a fungus, which gives them that color! Thanks for the information, Ken! :)

Henry Taube, Ph.D, M.Sc, B.Sc, FRSC (November 30, 1915 – November 16, 2005) was a Canadian-born American chemist noted for having been awarded the 1983 Nobel Prize in Chemistry for "his work in the mechanisms of electron-transfer reactions, especially in metal complexes." He was the first Canadian-born chemist to win the Nobel Prize. Taube completed his undergraduate and Masters degrees at the University of Saskatchewan, and his Ph.D from the University of California, Berkeley. After finishing graduate school, Taube worked at Cornell University, the University of Chicago and Stanford University. Wikipedia: Henry Taube

Ramon Hierro, , , and 34 other people have particularly liked this photo

I would expect to see this sort of colouration from ther being a high copper content in the soil.


Of course seen in “The MUSEUM”
8 years ago. Translate | Permalink

They ook moldy, but I guess that is their natural color.
8 years ago. | Permalink

cool colours in this one Janet.
8 years ago. | Permalink

I've never seen blue mushrooms before. Great images here, Janet, and I love your stories about how you came to get the shots.
Have a great day and happy snapping.
8 years ago. | Permalink

I must admit that I'd never before heard of real blue mushrooms! Colourful, bizarre, and beautifully taken.
8 years ago. | Permalink

These are so amazing - strange colours and I do like the fact that you cleaned them up first LOL
8 years ago. | Permalink

They look so sweet with so many colours and textures. I wonder what they thought of being taken from obscurity and given a moment in the spotlight.
8 years ago. | Permalink

OH!! how stunning is that!! blue mushrooms! - I have never seen one!!
amazing find, Janet!
8 years ago. | Permalink

A terrific shot of some interesting mushrooms, Janet! Great detail, find,
and description. Have a grand Tuesday!

Seen and Appreciated in Vivid, Vibrant Colours.
8 years ago. | Permalink

Amazing color--never have seen anything like this before!
8 years ago. | Permalink

First class photography! It makes me wonder just what small beauties lie under our feet that we normally don't see.
8 years ago. | Permalink