"A smile is the light in your window that tells others that there is a caring, sharing person inside." ~ Denis Waitley 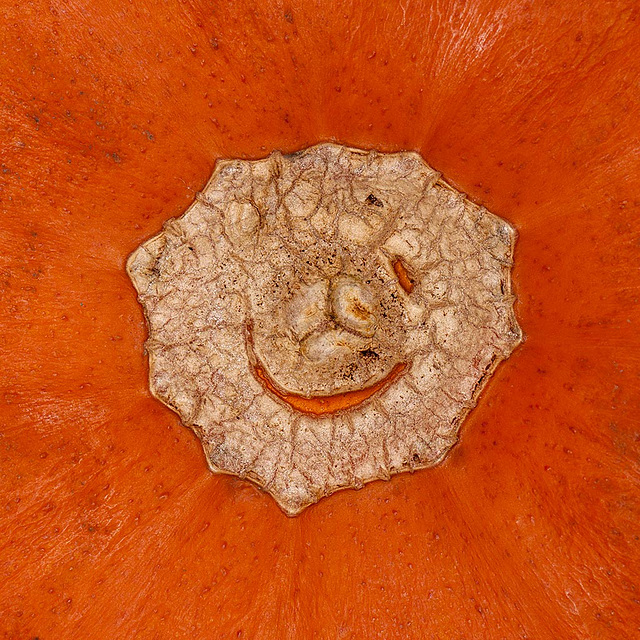 Before Halloween (October 31), I asked Steve to bring home a couple of pumpkins so I could take some festive pictures. I was delighted by his choices and got some really nice pictures of them (See the insets to see this pumpkin). One of the neat things about many squash varieties is that they will sit happily for weeks and weeks without rotting, so we have had these pumpkins for weeks now and they are in perfect shape. However, we would like to use them in cooking before they go bad, and so I looked up some recipes. I've never cooked with pumpkin before and I wanted to try something savory and different. I found a recipe for spicy Thai pumpkin soup that sounded wonderful. I found out what to do to prepare the pumpkin, and then cut it up and made the soup, which turned out so good that we wish I'd made a double batch of it! :D

I took some pictures of the inside and will post a couple of pictures sometime soon, but for now, I wanted to share this funny picture! Turning the pumpkin over, I found a one-eyed smiling face looking back at me!

Denis Waitley is a graduate of the U.S. Naval Academy at Annapolis, and has counseled leaders in many fields: Apollo astronauts, Fortune 500 top executives, Olympic gold medalists, Super Bowl champions, returning POWs. He was a founding member of the National Council for Self-Esteem. Wikipedia: Denis Waitley

, forever is a long time, , and 11 other people have particularly liked this photo

Thats so cute, thanks for making me smile in grey days here in Germany
8 years ago. | Permalink

A very creative shot and beautiful too!
8 years ago. | Permalink