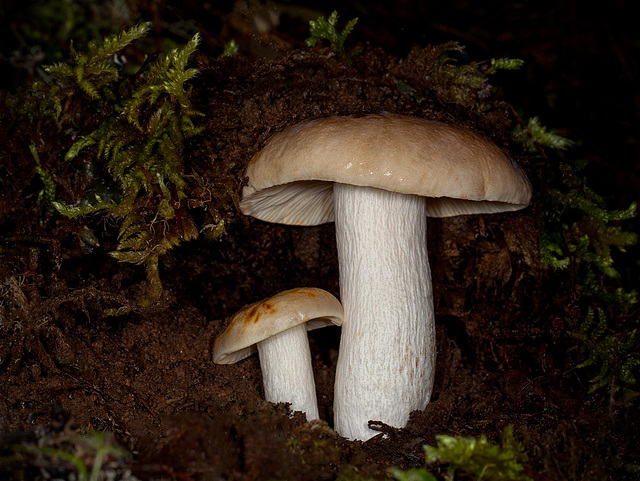 Such a pretty, sunny day it was today! Steve and I hopped in the car to drive around our "block" so I could take pictures off the property. Our "block" is actually about 7 miles around! The road travels up about 1,000 feet in elevation, through many kinds of terrain, and there are some conifer forests there that I've always wanted to investigate.

Once we found a good spot, I hopped out of the car while Steve enjoyed himself with some iPad games. Making my way into a pine-needle and leaf-strewn ravine, I immediately encountered mushrooms and different fungus all over the place. I was hoping to take a long look at the whole area but there was no chance of that because everywhere I turned, I would find another mushroom! :D

Resisting the urge to take pictures of every mushroom I encountered, I looked for something really special that would be a great image for my Picture of the Day. I looked up the far side of the ravine and saw some large mushrooms pushing their way out of the soil, so I made my way over to them. The first one was decaying and soggy, but I saw something peeking out at me from a bit higher. Carefully pulling away a clump of moss and dirt, I was presented with the beautiful sight that you see here. I took time to remove enough leaves and pine needles so that I could show the pair off, but I kept most of the beautiful moss and dirt that was still on top of them, looking like a green and brown roof. Aren't they magnificent?! :D I feel so fortunate every time I make an extra-special discovery!

Henry Ward Beecher (June 24, 1813 – March 8, 1887) was an American Congregationalist clergyman, social reformer, and speaker, known for his support of the abolition of slavery, his emphasis on God's love, and his 1875 adultery trial. Wikipedia: Henry Ward Beecher

Ramon Hierro, , , Jenny McIntyre and 34 other people have particularly liked this photo

Seen and Appreciated in Foto - a la Carte.
8 years ago. Translate | Permalink

two beauties again! like the contrast between the dark background and the bright mushrooms. wonderful
8 years ago. | Permalink

Magnificent work and such a perfect setting and lighting !
8 years ago. | Permalink

I really love this shot! The moss looks wonderful as a backdrop for the mushrooms!
8 years ago. | Permalink

Another very beautiful shot my friend,love it!
NATURE 200% UNLIMITED
8 years ago. | Permalink

You can count on me to admire your beautiful finds.
;-)
They're simply fabulous.,
8 years ago. | Permalink

So beautifully photographed!
8 years ago. | Permalink

Great artistic photo of these mushrooms which look like Russula decolorans. ( Thats just a guess, not in stone ID)
8 years ago. | Permalink

I absolutely love your photographs. You find beauty in strange places
8 years ago. | Permalink