320/365: "Happy is the person who knows what to remember of the past, what to enjoy in the present, and what to plan for in the future." ~ Arnold H. Glasow 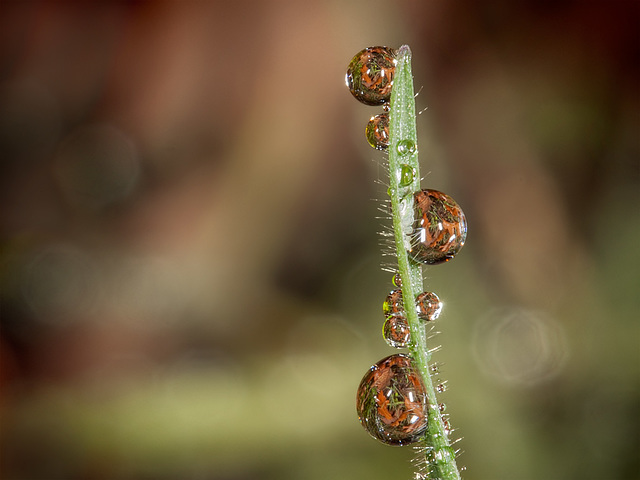 Today I have a presentation about a teensy-tiny little fungus called Cannonball Fungus, that I found a few days ago. It was very fascinating to me, but wasn't sure it was interesting enough to share. However, yesterday I was out with the dogs and studying a few logs along the way. I noticed some very tiny things growing, and when I was nearly eyeball close, I was amazed to find tiny jelly globes (the cannonballs!) resting on the interesting orange star-shaped fungus I found the other day. It was too late to take pictures so I went out first thing today, hoping they were still there...which I'm happy to say, they were! :)

After I got my pictures, I looked up and noticed that there were droplets of water clinging to everything around me! It had rained all night and the world was dripping wet. Just a foot away, I saw this blade of grass fairly bristling with droplets, and thought it would be fun to try taking some flash images of it. When I looked at the images on my computer, I was delighted to see that this one showed clear refractions of the White Oak leaves scattered on the ground below! There are even tiny droplets on larger droplets, totally crazy! :)

Arnold H. Glasow (Arnold Henry Glasow) (1905 - 1998) was an American businessman and humorist. He was cited frequently in the Wall Street Journal, Forbes, the Chicago Tribune and many other major publications. Daily Quotes: Arnold H. Glasow

Ramon Hierro, , , and 56 other people have particularly liked this photo

Gorgeous macro image and I love your photo stream!
Greetings from a Flickr refugee ;-)
Silvana
8 years ago. | Permalink

Wow!! What a delightful shot!
8 years ago. | Permalink

the reflection in the drops are fantastic...
8 years ago. | Permalink

The raindrops are truly beautiful, Janet. Gorgeous reflected colour with a great bokehed background.
Have a great week ahead.
8 years ago. | Permalink

Wonderful macro - such detail in the droplets .... and gorgeous bokeh !
8 years ago. | Permalink

Sumptuous !!!!!Excellent capture friend !!!! Compliments! Good evening from City beautiful Chandigarh!!! Wishes for happy n an enjoyable Time and up coming week !!!!
Masterpieces !!!
I like 1st in notes the best !!!
8 years ago. | Permalink

A remarkable and constructive work ..
In extreme beauty ..!
8 years ago. | Permalink

Seen and admired again in : Bokeh
8 years ago. Translate | Permalink

wonderful this Janet
8 years ago. | Permalink

DaMn! gurl friend... every single shot you have is so fREAkinG amaZinG, shhaaa~esh I don't know witch one to drool over first!
8 years ago. | Permalink

I just love water droplets and these are incredible
8 years ago. | Permalink