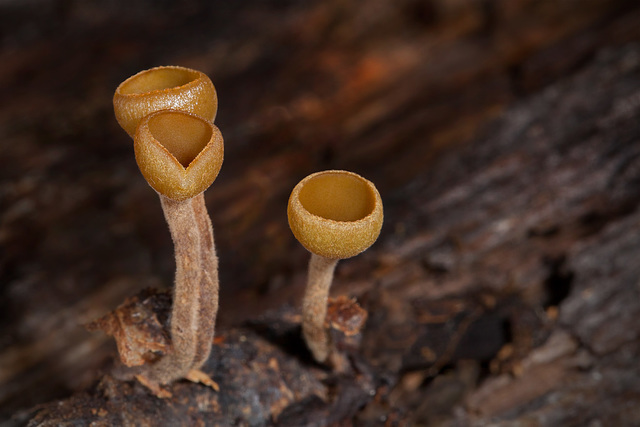 Ok, yesterday I mentioned some really cool moss sporophytes that I wanted to take pictures of. I never got to them, and planned to take pictures today. Well...I *DID* take pictures of them! But though I spent about 20 minutes taking many different images, in the end, I wasn't happy with any of them. I will have to think about it and try again!

However, there was no end to the mushrooms growing all over the place! Totally amazing, there are just so many! I found a really magnificent one and as I was clearing away leaves, I saw something odd below them. One good look and, "OH, WOW!!! CUP FUNGUS!!" The trio, which is about 1/2" tall, was attached to a bit of bark which I was able to lift up and place on a log for pictures. I've never seen cup fungus that looks like a perfect goblet before! And to think, if I hadn't been looking at the leaves and ground that I was clearing away, I would have never seen these beauties! I have done a bit of looking around on the net but haven't found out exactly what kind of cup fungi this is. Let me know if you're clever enough to figure it out! :D

Lord Byron (22 January 1788 – 19 April 1824) was an English poet and a leading figure in the Romantic movement. He is regarded as one of the greatest British poets and remains widely read and influential. Wikipedia: Lord Byron

, , , and 25 other people have particularly liked this photo

These are great! I have never seen any like these before! Wonderful image!
8 years ago. Translate | Permalink

Love how you always find the perfect quote for your pics. Love the cups.
8 years ago. | Permalink

Beautiful image of these lovely little mushrooms. I must confess that I have a preference for the group of three but this is also gorgeous. It's amazing how you go out intending to capture one thing and end up getting something quite different.
Have a great Saturday.
8 years ago. | Permalink

Again amazing and beautiful close up! Your explanations are useful and well detailled! Thank you for sharing! Good week end!
8 years ago. | Permalink

omg, these cups are so cool, I have never seen anything like them before either... they look all sparkly and just awaiting the pixies for a tea party! or better yet a champaign party!
8 years ago. | Permalink

I love your series!
8 years ago. Translate | Permalink

What amazing funghi - I love the cup shapes.
Very interesting to read about the connection between Japanese Barberry and Lyme's disease.
8 years ago. | Permalink

Excellent! I've never seen these before.
8 years ago. Translate | Permalink

Fantastic macros of these little cup fungi. The trio is perfectly taken.
8 years ago. | Permalink

your macro shos are breath taking !
wonderfully composed and presented.
8 years ago. | Permalink