[STORYTIME!] 315/365: “When the first light comes into the sky and the stars fade ... you look up here and I’ll show you something. I will show you my masterpiece.” ~ Charlotte's Web, by E.B. White 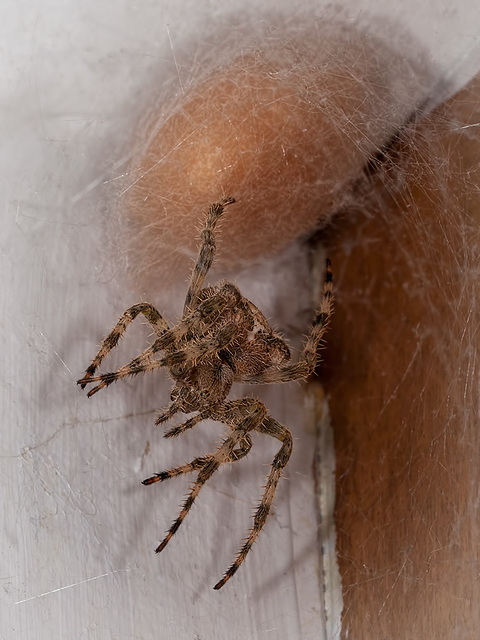 Last night I went to let the dogs out before watching our evening show and going to bed. As I always do, I looked up to the left side of our doorway where Roscoe, my wonderful orb weaver friend lives. Exclaiming in surprise, I burst out, "OH ROSCOE!!! YOU'RE MAKING AN EGG SAC!!!!" I charged upstairs to yell excitedly to Steve, "ROSCOE MADE HER EGG SAC!!!!!!" and before he could barely utter a surprised, "WOW!!", I zoomed back downstairs to continue watching her work, totally transfixed. Moving slowly all over her enormous egg sac, Roscoe dabbed strands of sticky silk. "Wow...you must have been working on this all day," I murmured to her affectionately. "It's so beautiful and HUGE!!" In fact, her egg sac is larger than she is, and I also noticed two more things. Roscoe was so skinny now--instead of being huge and plump, she was now empty of all the eggs that had been growing inside her bloated abdomen. And I also saw how exhausted she was. "My dear, dear girl," I cooed softly to her. "What a masterpiece you have made." She moved so slowly, dabbing and dabbing more silk to finish her grand achievement.

I got my camera and flash and took a few pictures, but I waited until midnight to get the picture here so that I could make it my Picture of the Day. The following image (both insets) were taken before midnight, while she was still finishing the last touches of her egg sac. One of the insets shows her dabbing silk onto her sac, which was very interesting to watch.

I have known Roscoe for over a year now, from when she was barely a quarter inch in size, and I've watched her go through hibernation (brumation) and grow into a magnificent, beautiful lady, with an abdomen of almost 1" in diameter! I know that these spiders only live for one season, and I was feeling very sad because it looked as if she wouldn't be producing eggs, though I saw two different suitors visit the area. As September turned to October, and then to November, I watched her with quiet worry. My concern was unfounded, because she has just finished her gift to me...hundreds of unborn Roscoe babies who I will adore as much as I have adored her.

I know that Roscoe's days are now truly numbered. She could live another day or maybe as much as a month...but I expect she will die within a week. I will miss her terribly, but I will be there to take pictures of her babies and maybe some of them will stay, just like Charlotte's children!! :) I will keep you informed as the days pass...

Charlotte's Web is a children's novel by American author E. B. White and illustrated by Garth Williams; it was published in 1952 by Harper & Brothers. The novel tells the story of a pig named Wilbur and his friendship with a barn spider named Charlotte. When Wilbur is in danger of being slaughtered by the farmer, Charlotte writes messages praising Wilbur (such as "Some Pig") in her web in order to persuade the farmer to let him live. Wikipedia: Charlotte's Web

Elwyn Brooks "E. B." White (July 11, 1899 – October 1, 1985), was an American writer. He was a contributor to The New Yorker magazine and a co-author of the English language style guide, The Elements of Style, which is commonly known as "Strunk & White". He also wrote books for children, including Charlotte's Web, Stuart Little and The Trumpet of the Swan. Charlotte's Web was voted the top children's novel in a 2012 survey of School Library Journal readers, not for the first time. Wikipedia: E.B. White

Tacheles club
A beauty of its own. And a hairy appearance. ,))
6 years ago. | Permalink

Pam J club
I think you know its not easy for me to look at these photos.

I have done alot better over the years and can mostly "catch and release."

That said... last year during the last weeks of the awful drought.... I watched a yellow and black Garden Spider live her life.. and as long as I didnt get too close.. I could appreciate the beauty of her.

I tried t shade her web a little.. but we were dealing with well over 100F plus daily and trips to 122F. She was fading.. She made two sacs.. and then died.

I amazed myself.... where her web (and sacs) was wasnt a good place for them... IF they even were viable and the heat hadnt cooked them. SO... I carefully (with gloves on !!) removed the sacs to a hollow tree and nestled them in the leaves inside the hollow. They were safe and shaded.

I will never know if there was a hatching....

So... all the above to say.. I may not be able to look... but I DO understand the attachment and the sorrow.. and the joy

Penny
A great read Janet. I wonder what you're going to do with 100's of little spiders when they hatch!
I Love the photo :)
6 years ago. | Permalink

Eunice Perkins club
This is something well worth seeing. You are making me see spiders in a new light!
6 years ago. | Permalink

Rajan C.K
Fantastic macro Janet, though a little creepy if spiders are not exactly your favourites. But more than anything, loved your notes for this photo.
6 years ago. | Permalink

Rita Guimaraes
That's so beautiful and sensitive!
6 years ago. | Permalink

Levina de Ruijter
That sends shivers up my spine. Brrrr... But a very good shot, Janet.
6 years ago. | Permalink

Chrissy club
I love the stories behind your pictures! The shot with the threads coming out of roscoes body is impressing!
6 years ago. | Permalink

Blueman
Amazing and great details close up!
6 years ago. | Permalink

Jean club
Gorgeous image. And thanks for reminding me of a favourite book.
6 years ago. | Permalink

Phill G
Great pics.Your enthusiasm is heartwarming, Janet. Lovely to have interest and affection for creatures like this. We had a little yellow mantis running around the house for almost a year...we LOVED it. Hope the baby spiders do well...look forward to the pics!
6 years ago. | Permalink

Chip Miller
What a wonderful image to accompany your fabulous write-up. You have an appreciation and zest for living things that in infectious and awe inspiring. Bravo to you, kid! You are making me an Ipernity addict. :) Thanks for the journey. Give my best to Roscoe, even though spiders do creep me out a little. :)
6 years ago. | Permalink

Jim Abbott
I see Roscoe is still looking good! I will be sad right along with you when she goes.
6 years ago. | Permalink

tiabunna club
A fine image of a fantastic structure. Isn't it amazing how animals just know how to do things?
6 years ago. | Permalink