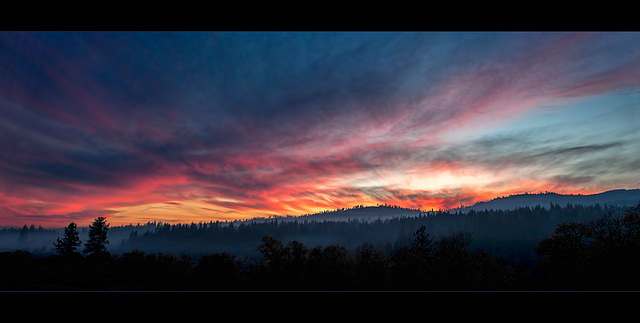 Today Steve and I went out for a special sushi lunch at our favorite Japanese restaurant and as we ate, I told Steve about Remembrance Day and how it related to my poppy picture from yesterday. I told him the wonderful things that people wrote and how I changed my quote and whole direction of my post and all that I had learned. It really is amazing how enlightened I have become because of my interest in photography and all of the friends I've met first on Flickr and now on ipernity. My life has been so enriched and I am ever thankful and happy for the opportunity to grow in so many ways. *hugs all around*

After lunch we went to see Ender's Game (mixed reviews, but I liked it overall). and as we were driving home, we saw the sun sink lower and lower and become prettier and prettier. When I got home, I grabbed my camera and the 17-40mm wide angle, and we zoomed back down the road where we thought the sunset might look extra special. We stood there enjoying the lovely day's end and taking pictures, and I also thought about how lucky I am to be free.

When we got home, the sun had set, but as I continued to glance out the window, the colors suddenly got brighter and brighter, with hot pinks and oranges, red and yellow, against the darkening blue sky. I opened the window in the downstairs bathroom, stuck the camera out, aimed and fired! This is that picture! I took several more, and I also went outside, but this was the peak of brilliance and I was lucky enough to get the picture! It might just be my favorite sunset I've captured yet, hooray!! :)

Patrick K. O’Donnell is a critically acclaimed American author who has written eight books on military history. He received the Colby Circle Award for Outstanding Military History for his best-selling book, Beyond Valour. As an unpaid, volunteer combat historian, O’Donnell spent three months in Iraq in uniform and conducted oral histories of U.S. troops in battle. On a later tour to Iraq, he also served as a war correspondent for Men's Journal and Fox News. His writing has also appeared in Military History Quarterly (MHQ), WWII Magazine, and a number of well-known blogs. Wikipedia: Patrick O'Donnell

Eunice Perkins club
It's a stunning photo! (You are right that when involved in Photography you do learn a lot!)
6 years ago. | Permalink

Gerda club
A fantastic natural show that you captured so spontaniously and with a magic result! The rose hip macro is also a masterpiece.

Found and enjoyed in the group gallery at:
Hang It!
6 years ago. | Permalink

Penny
This is glorious Janet!
6 years ago. | Permalink

Dave Hilditch
Stunning colour here, Janet. Sunsets change by the second and you've caught this one at its loveliest. I must say that you have a great view from your downstairs bathroom!
Have a great week ahead.
6 years ago. | Permalink

Phill G
Wow, that's a stunner, Janet. (and what a fine view from your downstairs loo...I'd be making the window bigger, if I were you!)
6 years ago. | Permalink

Tacheles club
What a lovely pano. These are the highlights of fall.
6 years ago. | Permalink

Dean Morley (on and… club
What beautiful images Janet. Have a lovely week. :-)
6 years ago. | Permalink

Jenny Downing
what a simply stunning sky!!
6 years ago. | Permalink

Chrissy S
I love sunsets like this. Beautiful colours and wonderful layers ~ an excellent capture of the scene. Have a great week
6 years ago. | Permalink

Puzzler4879 club
Wonderful shot and a great story. And be assured that my wife and I are enriched knowing you and enjoying your work as well! Let's never forget those you gave their lives so that we can go out with our cameras as free people.

Enjoyed in www.ipernity.com/group/bilderfreunde-niederrhein.
6 years ago. | Permalink

Chrissy club
I think not only your photos are something special, so are you, Janet. I love to read your stories about the pictures. And it gives me great pleasure to comment on them. I'm happy about every comment from you, as they also are special.
6 years ago. | Permalink

Mags:-) off for a wh…
Stunning!!! Absolutely stunning!!! What a magnificent view!!!
6 years ago. Translate | Permalink

koaxial
outstanding sunset, Janet!! a perfect sky. the feathered clouds and the awesome colors make this really an event! -LOVE IT!!!!
6 years ago. | Permalink

Chip Miller
Beautiful image indeed, Janet. I am just bursting at the seams as I type this, due to your more than kind words about the hummer portrait. Thank you for even noticing my images on this big pond known as ipernity. I will probably always be a small fish here, but feel like a whale due to your encouraging comments. You are a special person. Thank you.
6 years ago. | Permalink

Evergreengirl
A fine series of sunset shots. This one is my favorite for both the fabulous colors and the composition.
6 years ago. | Permalink

tiabunna club
Super colours in this sunset panorama, Janet. The residual smoke from the controlled burn also has helped by emphasising the ridges and contours of the countryside.
6 years ago. | Permalink