311/365: "I have always looked upon decay as being just as wonderful and rich an expression of life as growth." ~ Henry Miller 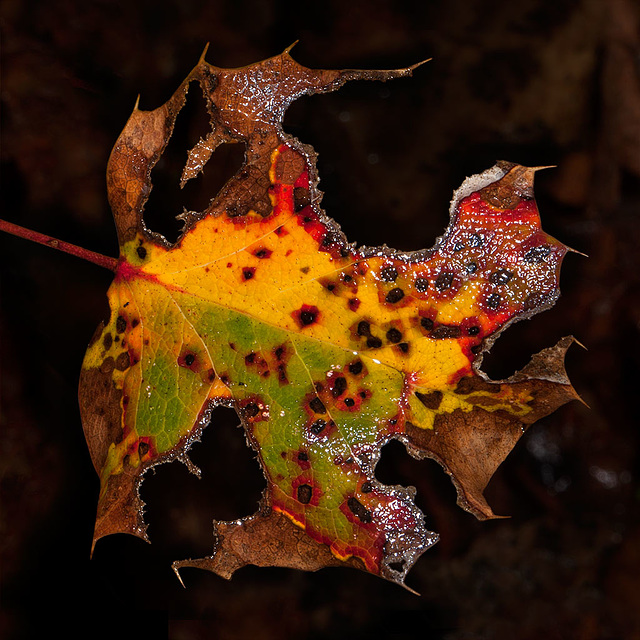 The day began with a thick blanket of fog that hung around until noon, accompanied by light rain on and off. Every time I got ready to go out for pictures, it would begin to rain again. As the afternoon crept along, I noticed that it was only drizzling, so I went out with my macro flash attached and made a bee-line for the woods.

I wasn't looking hard for mushrooms today since I posted them several days in a row, but of course I did find some and took pictures anyway! :D (I'll save those for another day! :) Instead, I looked for something else to catch my attention...it didn't take long!

On our property we have a plant called Oregon Grape, and I used to think it was Holly because the leaves look so similar. However, I learned that they are only distantly related. Like Holly, Oregon Grape is an evergreen plant, but while I was wandering around, I discovered that some leaves were dying in a most spectacularly beautiful fashion! Splashes of brilliant yellow and red, along with (fungal?) spots of black and brown, and edges eaten away by insects, I was captivated by their beauty! After looking at all of my pictures, I'm sharing my two favorites tonight.

Henry Valentine Miller (December 26, 1891 – June 7, 1980) was an American writer. He was known for breaking with existing literary forms, developing a new sort of semi-autobiographical novel that blended character study, social criticism, philosophical reflection, explicit language, sex, surrealist free association and mysticism, always distinctly about and expressive of the real-life Henry Miller and yet also fictional. His most characteristic works of this kind are Tropic of Cancer (1934), Black Spring (1936), Tropic of Capricorn (1939) and The Rosy Crucifixion trilogy (1949–59), all of which are based on his experiences in New York and Paris, and all of which were banned in the United States until 1961. He also wrote travel memoirs and literary criticism, and painted watercolors. Wikipedia: Henry Miller

Jenny McIntyre, Telemaque, forever is a long time, James Wiley and 16 other people have particularly liked this photo

Chrissy club
looks like some kind of art, does´t it? the magnificent colors are great, in the second picture as well
6 years ago. | Permalink

Tacheles club
The beauty of decay.
6 years ago. | Permalink

Phill G
Ace range of colour on one leaf. Really nicely photographed.
Moosie looks a darling. Bassets are such a cool breed.
6 years ago. Translate | Permalink

Mags:-) off for a wh…
Striking colours and detail!!!
6 years ago. Translate | Permalink