309/365: "Your success and happiness lies in you. Resolve to keep happy, and your joy and you shall form an invincible host against difficulties." ~ Helen Keller 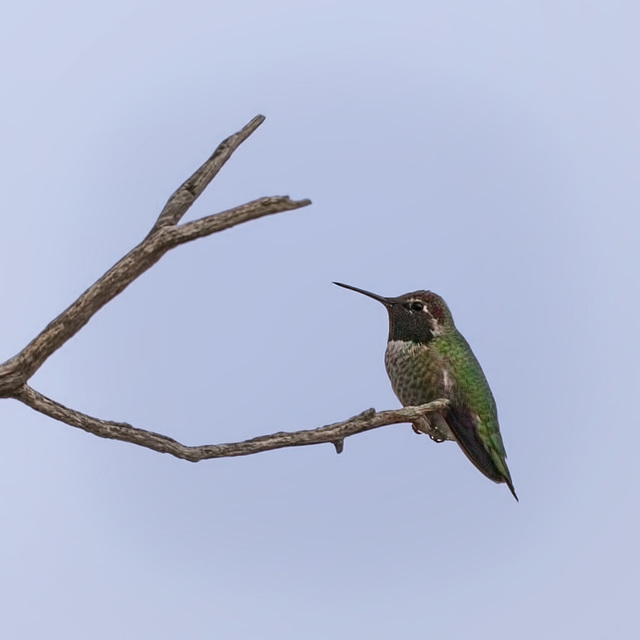 This morning I looked out the kitchen window and saw this adorable hummingbird sitting on a branch. I think they are so darn cute when they are sitting still, and I watched in joy while it turned its head this way and that. When it didn't fly away, I thought, "Oh...I'll try..." and I zoomed to get my camera, returning to find it still sitting happily! I took pictures through the window, but when it kept sitting there, I thought, "I wonder if I could open the back door and get a little bit better angle?" I tried...and this darling little bird watched me slowly creep over without fear. I managed to get this picture and several others before it flew off, returning an instant later for a sip of nectar from the hummingbird feeder before really flying off! :) Yay for adorable hummingbirds!!! :D (I am pretty sure this is an Anna's Hummingbird. Its throat feathers are red when the sun hit them, but its back was facing the sun so I wasn't able to get those gorgeous, gleaming feathers to light up for the camera.)

Helen Adams Keller (June 27, 1880 – June 1, 1968) was an American author, political activist, and lecturer. She was the first deafblind person to earn a Bachelor of Arts degree. The story of how Keller's teacher, Anne Sullivan, broke through the isolation imposed by a near complete lack of language, allowing the girl to blossom as she learned to communicate, has become widely known through the dramatic depictions of the play and film The Miracle Worker. Her birthday on June 27 is commemorated as Helen Keller Day in the U.S. state of Pennsylvania and was authorized at the federal level by presidential proclamation by President Jimmy Carter in 1980, her 100th birthday. Wikipedia: Helen Keller

RHH, TKJ1966, Aviolet, andréa and 26 other people have particularly liked this photo

Chrissy club
no hummingbirds in this area here ... :-( thanks for sharing this beautiful one
6 years ago. | Permalink

Seen and Appreciated in From (T)here to Ipernity.
6 years ago. | Permalink

Seen and Appreciated in Nature!! No Limits.
6 years ago. Translate | Permalink

Chrissy S
Beautiful Janet, in fact breathtaking and I so love those moments where they choose to share their little bit of space with you.
6 years ago. | Permalink

Eunice Perkins club
I'm glad you managed to get your camera and take this delightful photo!
6 years ago. | Permalink

Seen and admired in : # NEW #
6 years ago. Translate | Permalink

Penny
Its so pretty!
6 years ago. | Permalink

Blueman
Great photos and close up!
6 years ago. | Permalink

Dave Hilditch
Lovely image, Janet. Great view of the hummingbird. I like the mushrooms too - especially when they're sizzling in a pan alongside some bacon!
6 years ago. | Permalink

Chip Miller
Lovely series, Janet. Looks like a young male Anna's to me as well. Amazing how the color of the gorget can change in different light. The macro is beautiful work as well. Aren't all skunks striped? :)
6 years ago. | Permalink
Janet Brien club has replied to Chip Miller
No, they are also spotted! Here's a video of one standing on its front legs to be able to spray higher into the air! www.youtube.com/watch?v=WTQc-WEb5h8
6 years ago. | Permalink

tiabunna club
A lovely shot of the hummingbird. Isn't it a great feeling when the wildlife cooperates! Seen in www.ipernity.com/group/prime-lenses.
6 years ago. | Permalink

Malik Raoulda club
A remarkable and hard work .. It has always expect new and big surprises .... Magnificent.
6 years ago. | Permalink

~Roxanne~
Fantastic shot, Janet! Every detail is so clear! And congrats on Explore!
6 years ago. | Permalink

Keith Burton club
Janet you are so lucky to have these beautiful little birds in your garden!! Getting close enough to shoot it with a 100mm lens must have taken some doing :) Excellent capture :)
6 years ago. | Permalink