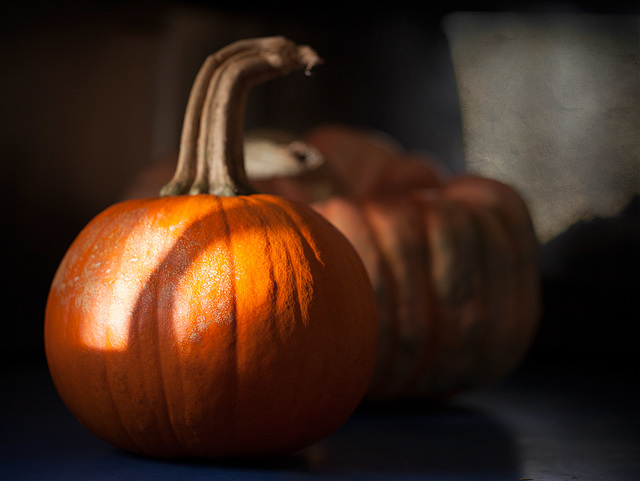 Sometimes picture opportunities present themselves when you're not even thinking about photography! This morning I went downstairs into the kitchen and as I glanced out the window, I noticed the sunlight streaming in, bouncing off a cabinet and landing on one of our pumpkins. It was shining past our parrot's perch that we have attached to the window and casting a very cool, curved shadow over the pumpkin's surface. "Oooooo, LOOK AT THAT!!" I said to myself, and as I appreciated the light and shadow, it suddenly occurred to me that this was not an opportunity that would last forever because even as I looked, clouds moved over and past the sun, changing the intensity of the shadow. I ran for my camera an took pictures from different angles, and then a thick cloud caused the shadow to diminish and leave only a diffused light glowing on the surface. I looked at the different pictures and picked out my favorite image with the shadow, and my favorite with just a diffused light. What I love most about this pair of pictures is that the situation was totally unplanned. The pumpkins were sitting in that position from the night before when I pushed them out of the way for dinner preparation.

Louis Pasteur (December 27, 1822 – September 28, 1895) was a French chemist and microbiologist who is well known for his discoveries of the principles of vaccination, microbial fermentation and pasteurization. He is remembered for his remarkable breakthroughs in the causes and preventions of diseases, and his discoveries have saved countless lives ever since. He reduced mortality from puerperal fever, and created the first vaccines for rabies and anthrax. His medical discoveries provided direct support for the germ theory of disease and its application in clinical medicine. He is best known to the general public for his invention of the technique of treating milk and wine to stop bacterial contamination, a process now called pasteurization. He is regarded as one of the three main founders of bacteriology, together with Ferdinand Cohn and Robert Koch, and is popularly known as the "father of microbiology". Wikipedia: Louis Pasteur

Stan Askew club
well said, Janet ... we never know what the changing light will present us. one of the wonderful aspects of photography. this is a magnificent shot!
6 years ago. | Permalink

Blueman
A marvellous serie of pumpkins with beautiful colors and light! Bravo!
6 years ago. | Permalink

Cheryl's Images
It's having an eye for the unexpected...you certainly have....wonderful shot.
6 years ago. | Permalink

Valfal club
I love photo ops like this! Gorgeous capture!
6 years ago. | Permalink

Dave Hilditch
The colour of pumpkins is gorgeous and you've captured it so well here, Janet.
Have a great week ahead!
6 years ago. | Permalink

Keith Burton club
Such a strong study in light & shadow................your quote is extremely apt as well. Without your "eye" for a shot and photographic skill, this happy coincidence of sunlight and location could have gone unnoticed and unrecorded!
6 years ago. | Permalink

Ken Dies club
Lovely pumpkin photos. I like the fungi photo the best.
6 years ago. | Permalink

Eunice Perkins club
I think I like this one best, but then I'm not sure. Lovely shot both of them.
6 years ago. | Permalink

Puzzler4879 club
Absolutely exquisite, Janet, and my compliments on a great Explore selection!!
6 years ago. | Permalink

Esther club
I really like your capture of the shadows on this pumpkin.
6 years ago. | Permalink