Green and Yellow Maple Leaves Burning Maple Leaf 293/365: "Every leaf speaks bliss to me, flutterin… Pair of Common Vetch Dutch Clogs! Squirrly Whirlly on the Lookout! 294/365: "Details create the big picture." ~ Sanfo… Pinecone Stuck on Poison Oak Colorful Black Oak Leaf 295/365: "Tears are the symbol of the inability of… Little Mushroom, So Tiny but Tall Hanging By A Strand 296/365: "Photography is more than a medium for fa… Bokeh Thursday: Rusty and Destroyed Old Pail Bokeh Thursday: Destroyed Deer Hair on Rusted Nail… Bokeh Thursday: Rusty Nails in Destroyed Oak Tree Bokeh Thursday: Rusty Nails in Destroyed Oak Tree Bokeh Thursday: Acorn Destruction on Top of Destro… Colorful "Autumn Flower" Laying on our Dry Pond 297/365: "Nothing can beat the smell of dew and fl… Black Oak Leaf with Tree Bokeh Magnificent Feather in Glowing Light 298/365: "Photography is an art of observation. It… Canada Goose Swimming Through Maple Tree Reflectio… Pair of Mushrooms and Tips for Photographing Fungu… Autumn White Oak "Flower" 291/365: "Everyday holds the possibility of a mira… Newly Emerged Clio Tiger Moth on Milkweed Pod Clio Tiger Moth Ready for Take-Off! Clio Tiger Moth Dry and Resting Gangsta Clio Tiger Moth Strikes a Pose Clio Tiger Moth from the Side Clio Tiger Moth About to Emerge (side) (With lots… Clio Tiger Moth About to Emerge (above) (With lots… Bokeh Thursday: Ice Cube 290/365: "In the realm of ideas everything depends… The Magnificent Ponderosa Pine Cone Scale Lovely Group of Ponderosa Pine Cone Scales Isolated Ponderosa Pine Cone Scales 289/365: "How brave a ladybug must be! Each drop o… Ladybug Taking a Stroll on my Glasses Up Close and Personal with a Ladybug on my Glasses Ladybug Wingies! 288/365: "To expect the unexpected shows a thoroug… Petite Orb Weaver Spider Web (and spider too!) Dimpled Pear

292/365: "Those who dwell among the beauties and mysteries of the earth are never alone or weary of life." ~ Rachel Carson 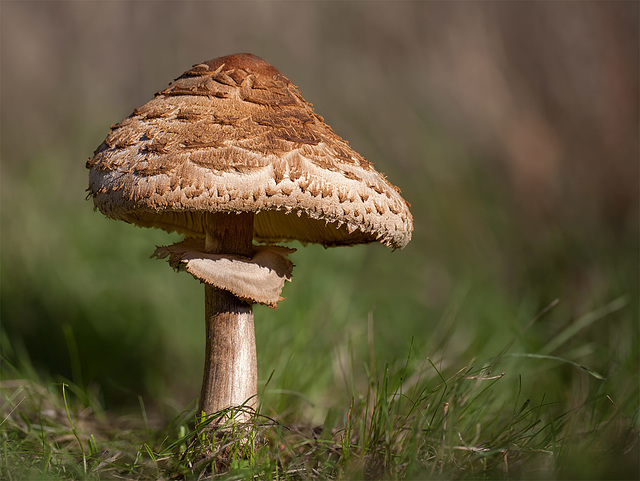 2 more pictures in notes above! :)

About a week ago, I discovered some special mushrooms growing down by the road where I saw them last year. Because I know that these ones live for weeks, I didn't rush to take pictures, and instead waited for the right time. Well, today was the day! Steve had the camera on a photo shoot until this afternoon, which meant the sun was in the perfect placement for these mushrooms. In the morning the area is in deep shadow and only when the sun begins to dip towards the horizon does the light look just right for this area of the property.

I took Moosie and Zoe with me and as I approached the spot, I noticed that there were other mushrooms too! Taking one look at the large, gorgeous mushrooms, I immediately plopped down and groomed the area for taking pictures while Moosie and Zoe had fun nosing around and exploring nearby. When I got home, I was very happy to find that there were many nice images to choose between, but in the end, I ended up merging two pictures: one with an aperture of 2.8 for a soft background, and one with an aperture of 16 for deep focus on this mushroom, which was about 6" tall! I used a Topaz filter called ReMask to get a clean mask around the mushroom and then placed it into the image with the 2.8 aperture. A bit of massaging to remove bits of the original mushroom, a bit more massaging to work the crisp mushroom into place, and voila! Picture of the Day! :) (If you are interested, Topaz Labs has a 30 day free trial for all of their products, including ReMask: www.topazlabs.com/downloads

Rachel Louise Carson (May 27, 1907 – April 14, 1964) was an American marine biologist and conservationist whose book Silent Spring and other writings are credited with advancing the global environmental movement. Wikipedia: Rachel Carson

Gabriella Siglinde, Chris10, Anne Moilanen, and 32 other people have particularly liked this photo

This is superb !
8 years ago. Translate | Permalink

Well this is beautiful, lovely focus and depth of field
Have a lovely Sunday my friend.
8 years ago. | Permalink

An appealing shot!
8 years ago. | Permalink

Great worm's eye view here, Janet, and some great processing work too. Makes for a lovely image.
Enjoy your Sunday.
8 years ago. | Permalink

With all the trimming and flattening etc., and putting together the composite, there is an amazing amount of work gone into making this photo..................BUT BOY WAS IT WORTH IT! I particularly like your attention to small details, such as getting some light under the umbrella of the mushroom, it makes such a difference.
8 years ago. | Permalink

this is beautiful Janet!
8 years ago. | Permalink

Hope you are fine... Greetz, Christien.
4 years ago. | Permalink