Dimpled Pear Petite Orb Weaver Spider Web (and spider too!) 288/365: "To expect the unexpected shows a thoroug… Ladybug Wingies! Up Close and Personal with a Ladybug on my Glasses Ladybug Taking a Stroll on my Glasses 289/365: "How brave a ladybug must be! Each drop o… Isolated Ponderosa Pine Cone Scales Lovely Group of Ponderosa Pine Cone Scales The Magnificent Ponderosa Pine Cone Scale 290/365: "In the realm of ideas everything depends… Bokeh Thursday: Ice Cube Clio Tiger Moth About to Emerge (above) (With lots… Clio Tiger Moth About to Emerge (side) (With lots… Clio Tiger Moth from the Side Gangsta Clio Tiger Moth Strikes a Pose Clio Tiger Moth Dry and Resting Clio Tiger Moth Ready for Take-Off! Newly Emerged Clio Tiger Moth on Milkweed Pod 291/365: "Everyday holds the possibility of a mira… Autumn White Oak "Flower" Pair of Mushrooms and Tips for Photographing Fungu… 292/365: "Those who dwell among the beauties and m… Dragonfly on the Road Itty Bitty Beetle on my Thumb New Cat-Faced Orb-Weaver! 286/365: "Delicious autumn! My very soul is wedded… Eye of Equus Gorgeous Red "Autumn Flowers" Off we go into the wild blue yonder, Sailing by,… 285/365: "There are no extra pieces in the univers… Ponderosa Pine Jigsaw Puzzle Bark Ponderosa Pine Jigsaw Puzzle Bark Ponderosa Pine Bark Layers 284/365: "Real friendship, like real poetry, is ex… Morning Romp! (and lots of notes!) (Photography Chat!) Abstract Beauty: Deteriorated… Triangle! :) 283/365: "There is no medicine like h… Bokeh Thursday: Generic Tums 5-10 Sided Shape: Generic Acid Reducing Pills! 282/365: "There is one spectacle grander than the… Jet Stream Cirrus Clouds Droplets on Rose Petal in Color Droplets on Rose Petal in B/W 281/365: "The artist and the photographer seek the…

287/365: "Words are like the spider's web: a shelter for the clever ones and a trap for the not-so-clever." ~ Maltese Proverb 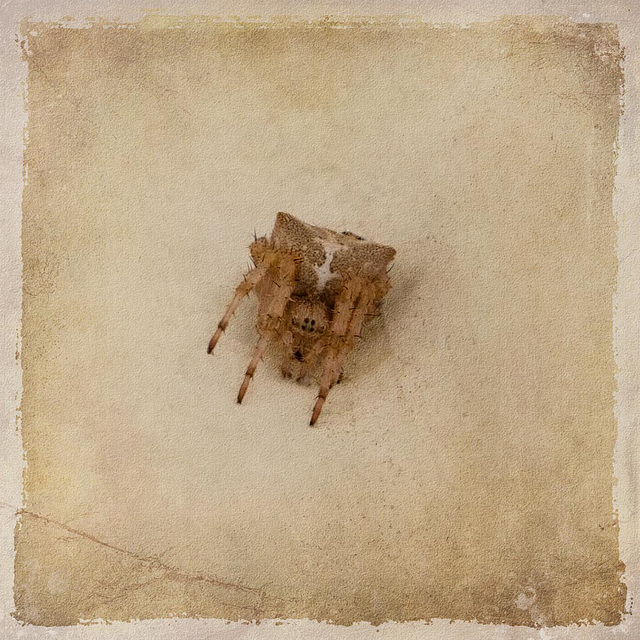 3 more pictures in notes above! :) My uploads tonight are all dedicated to The Sunday Challenge group! :D

You may know that I have become quite fond of spiders in the past couple of years since I began taking pictures and learning more about them. And when a darling little orb weaver spider came to live just outside my front door last September, I had a naming contest for my new little friend, who would be named Roscoe Frank McCrawlerson! :) I have read that Cat-Faced Orb Weavers live only one season, but it is now well-into October and Roscoe is still alive and well in her corner of her nook. She has had two suiters that I know of, but has not made an egg sac. I know that her time grows short, so I appreciate her every day that she is still here with me. (If you'd like to see pictures of Roscoe with many stories, here's a search for her pictures: Roscoe's Pictures on ipernity

A few days ago, I noticed that there was a NEW cat-faced orb weaver in a much darker color, hanging out on the ceiling of the porch. Soon it found itself a spot not very far from where Roscoe lives! I think it's another female, and about half the size of Roscoe, the a body about 2/3" in diameter. Hooray!!

And THEN I was looking around on the wall and suddenly gave a squeak of delight! There, near Roscoe's nook, was a BABY ROSCOE!! Awwwwwww!!!! Just a bit bigger than Roscoe when she came to stay (1/4"), this little doll is perfectly adorable, making beautiful, tiny webs and acting very brave and bold! I hope she and her older girlfriend will be here to stay, and I hope that everyone gets along! :) (Textures by Jerry Jones: Square-170 and Square-151 )

A big thank you to Shuttering Yukon, who is the admin for The Sunday Challenge, for letting my critter pictures slip in under the wire! :)

A proverb (from Latin: proverbium) is a simple and concrete saying, popularly known and repeated, that expresses a truth based on common sense or the practical experience of humanity. They are often metaphorical. A proverb that describes a basic rule of conduct may also be known as a maxim.

Proverbs are often borrowed from similar languages and cultures, and sometimes come down to the present through more than one language. Both the Bible (including, but not limited to the Book of Proverbs) and medieval Latin (aided by the work of Erasmus) have played a considerable role in distributing proverbs across Europe, although almost every culture has examples of its own.Wikipedia: Proverb

it's like a little cube of nastiness, ready to liquidise the next thing that passes by! nicely shot though :-)
8 years ago. | Permalink

stunning shot, Janet!!! - at a first glance an abstract composition.... at a closer look a strange spider! - wonderfully done!!!
8 years ago. | Permalink

Found and enjoyed in the group gallery at:
Hang It!
8 years ago. | Permalink

I love your macros, Janet. You do such a great job.
8 years ago. | Permalink

Great for the challenge and fantastic texture Janet.
8 years ago. | Permalink

He looks great on that texture!
8 years ago. | Permalink