Black Beetle on Daisy Rough Eyelash Bud in White Rough Eyelash Bud in Pink 172/365: "It is in your moments of decision that y… Sinky the Wayward Pacific Tree Frog Dreamy Common Vetch 173/365: "Never underestimate the power of dreams… Jumping Spider Collage Beautiful Jumping Spider Red Buds in A Green Star 174/365: "Bathe twice a day to be really clean, on… A Family of Friendly Droplets! :D Jumping Spider the Size of a Grain of Rice! Itty Bitty Jumping Spider 175/365: "Patience is a Virtue." ~ English Proverb Back View of a Red Milkweed Beetle Red Milkweed Beetle on a Stem Dressed For a Night on the Town! Glowing Red Chevy Master 176/365: "Red is obviously such a stimulating colo… Droplet-Paned Tendril Circle within a Larger Circl… Gracefully Curled Tendril with Refracted Leaf Musically Inclined Treble Clef Tendril Itsy Bitsy Spiders!! A Trio of Wild Oats 170/365: "I perhaps owe having become a painter to… Cucumber Beetle on a Rainy Day Angel's Pond: Froglet Contemplating Life 169/365: "For every drug that benefits a patient,… Angel's Pond: Pile o' Kids Longhorn Beetle on Blackberry Blossom 168/365: "Enough is as good as a feast." ~ Joshua… Grasshopper on Brodiaea Cropped Dried Flower Glowing in Early Evening Sunlight Betty Boop at the Medford Cruise Show 'n' Shine 167/365: "Worm or beetle - drought or tempest - on… Cute Little Shield Bug Gleaming Red Petunia with Satin Petals 166/365: "The cars we drive say a lot about us." ~… 165/365: "Keep your face always toward the sunshin… Angel's Pond: Emergence California Ringlet Butterfly on a Leaf 164/365: "Keep your love of nature, for that is th… Gorgeous Red Bud Bee Butt 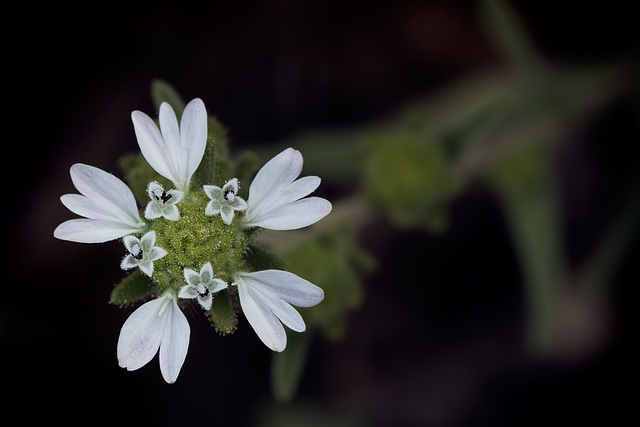 One picture in a note on the image! :D Other notes too! :)

These beautiful flowers are growing all over our meadow right now and I absolutely love how there are "flowers within the flower" in the center!

Socrates ( 469 BC – 399 BC) was a classical Greek Athenian philosopher. Credited as one of the founders of Western philosophy, he is an enigmatic figure known chiefly through the accounts of later classical writers, especially the writings of his students Plato and Xenophon and the plays of his contemporary Aristophanes. Many would claim that Plato's dialogues are the most comprehensive accounts of Socrates to survive from antiquity. Wikipedia: Socrates

Lovely image, Janet. They are, indeed, lovely flowers and the darker background really sets them off.
Have a great weekend.
7 years ago. | Permalink

Stunning capture Janet. Up there with the very best I have ever seen Well done Regards Tess.
Seen in NATURE!! No limits
7 years ago. | Permalink

WoW! I love the pictures, both of them. The view from the back is stunningly beautiful with the colours and the POV and the way you composed that photo! And the front is just as beautiful with the little mini flowers inside the main flower and the dark background for that picture! I LIKE it!
7 years ago. | Permalink

wishing you a great weekend
7 years ago. | Permalink

love how you get a picture in the notes, need to learn that. Lovely flower.
7 years ago. | Permalink

Beautiful beyond words !
7 years ago. | Permalink

That is a lovely little flower and it must be beautiful to see a meadow full of it! Excellent shot, Janet.
7 years ago. | Permalink

So beautiful.
7 years ago. Translate | Permalink

It really is a remarkable flower!
7 years ago. | Permalink

That is really lovely Janet!!
7 years ago. | Permalink

A subtle flower image, most beautiful!
7 years ago. Translate | Permalink

I love seeing flowers close up, with all the details
7 years ago. | Permalink

Wonderful shot and wildflower. They don't grow in the country where I live.
7 years ago. | Permalink