← All with the keyword: beach
← Those by: Janet Brien 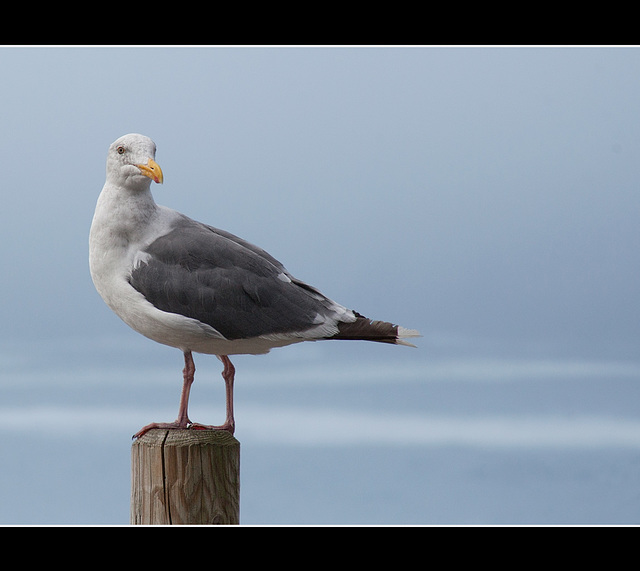 Oh, what a joy to see this bird again! This species of seagull is so familiar to me, and yet, I haven't seen one since I was in San Francisco last year, and before that, it was several years. Growing up in San Francisco, which is surrounded by ocean and bay on three sides, these seagulls are almost as common as pigeons. They love to hang out at schools because kids feed them and leave garbage everywhere for them, and, like pigeons, they are found wherever there are lots of people, ever alert for scraps of food.

The Western Gull is in a family of about 60 species which are found all over the world. This species lives along the west coast of North America, thriving from British Columbia down to Baja, California and Northern Mexico. Australian friends will notice its similarity to the Pacific Gull, with the exception of the beak, which is very different in thickness. Most gulls are migratory and move to warmer climates during the winter. They feed on all types of sea food, both living and dead, and are also happy to eat any type of food left by humans. Unlike most animals, gulls can drink and process saltwater!! Gulls are monogomous, and pairs live in large colonies of birds, building nests on the ground or on cliffs. Clutches usually contain three eggs, and breeding seasons last 3 to 5 months.

By the way, I've uploaded FOUR other pictures today and I hope you'll visit them too!

Thanks to all of you who have visited and have left comments and favorites! I try to go to all of your pages within a day or two and is a highlight for me to see your beautiful photography! :)
Suggested groups:
Comments