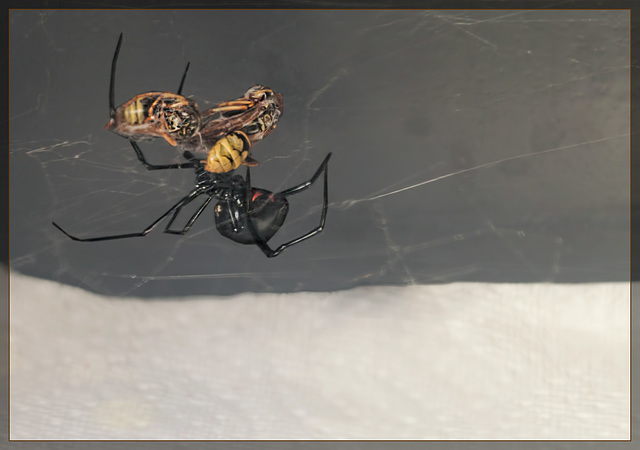 "The EZ Snack 2000! No fuss! No muss! The fast and easy way to get insects served to your web with no effort on your part! This fabulous spider-friendly habitat is spacious, clean and comes delivered and ready to move into for the low, low price of just $29.99! ORDER TODAY!!! 1-800-EZ-SNACK"
**Some assembly required, willing human slave not included, offer void where prohibited by arachnophobes.

Here's a picture of my Black Widow spider with two paper wasps, wrapped and ready for snacking! What a life she has these days! All she has to do is relax in style, and out of nowhere, more insects appear in her habitat!What a deal!! It has been fun to watch her chowing down on the wasps that are swarming around this summer. Steve put seven wasps in a couple of days ago and there are only two left this evening, what a little piggy!! (Her habitat is a seedling tray with a plastic dome on top, lined with white paper towels. The dome has two sliding hatches on top that open and close securely, and the dome is taped closed to ensure she doesn't get out! :D)

I have read that these spiders bite their prey and then wait for them to stop moving before moving in to eat, but this particular spider does not do that. When she's ready to eat, she'll run over to a wasp that's alerted her and quickly begin tossing swaths of sticky silk on it. She ties off strands here and there, and the insect is quickly immobilized and soon can barely move. After waiting a few more minutes for it to become exhausted, she then goes in and bites it behind the head, causing it to die almost instantly. A Black Widow injects a powerful neurotoxin that affects the nervous system, quickly paralyzing and then killing the insect.

(Warning: gross details ahead!) Once their prey is dead, they go to the bite site and begin chewing the area, releasing digestive enzymes that liquefy the animal's insides, which are then sucked out. After my spider is done with her feast, she carefully detaches the insect from her web and lets it fall to the ground. She will sometimes pull the insect husks into a pile, where they sit like gruesome trophies!

This will be the last Black Widow spider picture for a while. I plan to take a couple more before I release her far, far, far, far, far from my house, but I think we've all had enough creepy pictures for now! I hope you've enjoyed these! It's been so much fun learning about these spiders and sharing the information with all of you! Thanks for your great comments and encouragement, you guys make me feel GREAT! *hugs* :D
Suggested groups:
Comments