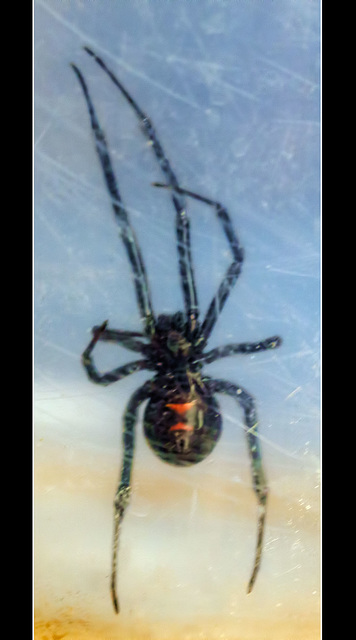 This is the first picture I took of the Black Widow spider that I found in our shop. After crawling around the bottom of the translucent, plastic cup I'd coaxed her into, she finally climbed up the side, and this allowed me to instantly identify her. What you may not know is that some Black Widows do not display the characteristic hourglass or double triangular markings. I learned a lot about these spiders and I bet you'll be just as surprised as I was at some of this information!

There are 32 species of Widow spiders and they can be found all over the world with a few exceptions, northern Europe to name one. (However, they have False Widows, imported from the Canary Islands, to contend with instead!) There are three species known as "Black Widow Spiders," all which live in the United States, Canada and Mexico.

Some interesting facts about Widow Spiders:

• Not all Widow spiders are black! There are many species which are brown, and they also come in white, red, and beautiful spotted patterns of black or brown with white and red markings. (The Elegant Widow Spider from Japan is stunning!)

• Widow spiders have voluntary control of the venom they inject, and this is one of the reasons it's so difficult to distinguish the potency of poison from one species to the next.

• Widow spiders are nocturnal, very shy, and will run away if disturbed.

• Widow spiders are not aggressive and will not bite humans unless they are being hurt and cannot get away.

• Like most spiders, male Widow spiders are much smaller than females (about 1/3 size compared to a female) and they are harmless to humans.

• Black Widow spider are not the most dangerous spider in the world! That ominous title goes to the very deadly Brazilian Wandering Spider.(I'll be doing a post about dangerous spiders tomorrow!)

• Many Widow species are not particularly dangerous, especially Brown Widows.

Fascinating. Thanks for the info.
8 years ago. | Permalink

The western ones I see around AZ are all brown when they hatch.
The females eventually turn jet black once they get larger and have molted several times.
The males seem to stay brown and stripey with an orange hourglass and are much smaller than the females. The males are not supposed to be deadly, but I'm not going to test that theory.
I can distinguish the males from the young females by the round pom-pom like pedipalps on the males.
Some people may think I'm demented but there's something fascinating about these creepy critters.
Black Widow (Queen Creepy)
Black Widow (Queen Creepy)
7 years ago. Edited 7 years ago. | Permalink