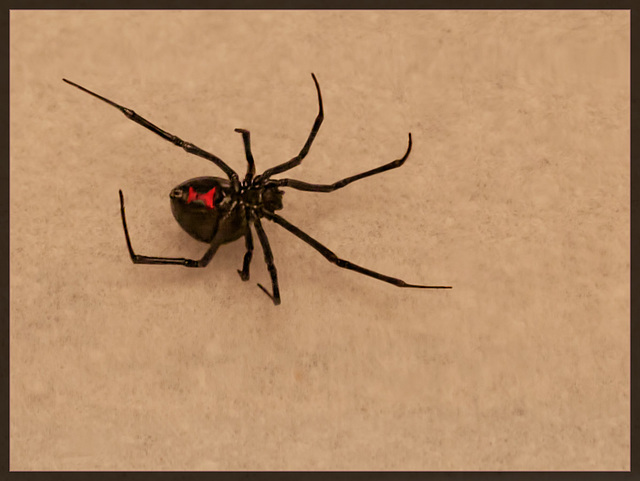 When Steve and I moved up to the countryside of southern Oregon years ago, I was excited that we would be living in the midst of so much wildlife. However, in the first month of living here, I got a horrifying surprise when I saw a very large, inky-black spider under the stairs in our garage and discovered that it was, indeed, a Black Widow spider!! That one was the largest I have seen, with an abdomen of nearly half an inch in diameter!

Since then, I've been extremely careful about putting my hands in dark places. I've found several Black Widows, including a couple of tiny males, one of which was in our downstairs bathroom!!!

Since I got my new camera last November, I've been keeping my eyes open for Black Widows but they were nowhere to be seen, which was a little bit annoying because I know they are very common here. However, like many spiders, they are nocturnal, very shy, and run away at the first sign of something big and scary like a human.

About a week ago I went over to our shop and when I turned on the light, I found a large black spider moving across the floor and trying to get out of the light. I quickly found a container, carefully coaxed it in, popped a lid on and brought it to the house for a better look. As I watched, it climbed around the sides of the container and I saw what I was looking for! The classic hourglass markings on the bottom of the abdomen, showing this spider to be a female Black Widow! YES!!

I put her into a clear glass jar with the idea of taking pictures and then...what? Steve wanted to kill her immediately but I told him no--I want pictures! The internet sided with Steve; even those who like spiders draw the line at spiders which pose a threat to humans. Fair enough. But still she sat, lurking in her jar, awaiting her demise, as one day turned into three. I realized that she must be hungry, and even though she was sitting on death row, perhaps it would be fair to give her something to eat. So, I found a cucumber beetle that had wandered into the house and carefully popped it into the jar. A few hours later, the spider was feasting happily. Steve decided that our new guest was interesting too, and presented her with a beetle, which was captured and eaten with relish. Then for a real bit of fun...a wasp was buzzing around in the kitchen. A good whack with a fly swatter to disorient it, Steve grabbed it with a paper towel and stuffed it into the jar. Was that delight on his face when we found her chowing down an hour later? I know that was the expression on MY face!

Time to get serious. It was time to get back to the plan...pictures and a swift death. However, I discovered that taking pictures through curved glass doesn't work very well at all. Distortion from the curve of the glass ruins the picture and using a flash amplifies problems. What to do, what to do...ah yes! Let's put her into a square glass container! I found a plant seedling tray with a clear plastic dome, cleaned it up and lined it with white paper towels as a better contrast. I then eekingly (yes, that's a new word!) transferred her into it, popping the dome on top as she began scurrying to the edge of the tray! Make no mistake: I know EXACTLY what I'm dealing with here, and use great caution when there's nothing between me and this spider!

With the lid on, I sat and watched her as she crawled over to a corner. This should work well for pictures, I thought, and noticed that the plastic dome had two vents which slide open like little hatches...perfect for popping insects through! Let's try it out!

Bouncing up, I grabbed the fly swatter, went out to the trays of water we have for the birds, and smacked a wasp balanced on the surface tension. Before the drenched wasp could crawl out and fly away, I flicked it into a cup, covered it with the fly swatter, went inside and got the wasp through the opening into the dome, where it buzzed around in a fury, trying to find something to sting. I watched with a mad gleam in my eye...why, this was the best gladiator event ever! It didn't take long...the wasp would fly down to the floor and trip a few strands of the spider's web, and she should come running over. The wasp would climb up to the dome, out of harm's way, and she would return to her corner. But then it happened! The wasp flew down to the ground and wandered over to her corner, laden with sticky strands. It got stuck and tried to free itself, but before it could, the spider ran over and began throwing invisible strands over it here and there. The wasp tried to sting her, straining against the sticky web, trying to reach her with its stinger. It was no use. The harder it struggled, the worse it became stuck. All the while, she dashed in and out, busily tossing more strands, securing them here and there, and then, she moved off to the side and just waited. This was a surprise to me because I thought she'd just run in and bite it for an instant death, but she didn't. The wasp slowly exhausted itself, always straining that stinger and hoping desperately to find a target. Finally, when it was so immobilized and tired, she moved in and killed it instantly. An amazing battle, but an easy victory for this deadly foe.

As you can see, I've taken a picture, but it's not a good one. We've also discovered what fun it is to feed her wasps. So, we'll be keeping this spider for a while longer but I've decided that I would like to release her far from home, because the fact is that there are hundreds of these spiders all around our home, though we cannot see them. Her death would not make a difference in the number of these spiders, and frankly, I don't feel right about killing her. After all, this is her home. It is our job to be careful of the wildlife here, but it wasn't her fault that she found her way into our shop. (I'll be posting another picture or two in the future, along with more information about these spiders.)
Suggested groups:
Comments