The Most Dangerous Spiders in the World! 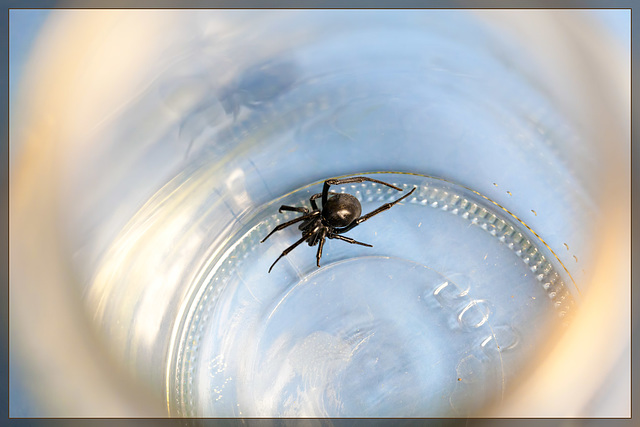 Here is my Black Widow spider huddling at the bottom of the jar I first placed her in after capturing her in a plastic cup. I soon found that taking pictures through a glass jar doesn't work very well because of distortion and glare. However, this image through the top gives one the feeling of peering in to take a better look. What you don't know is that the second I put the lid back on, she raced up an unseen thread to the opening and I was rather alarmed to realize how quickly she could have escaped, just moments after I'd got her into the house! To put it mildly, "EEEEEEK!!!" :D

Keeping this Black Widow temporarily for observation is a wonderful opportunity for learning more about these spiders, and the first thing I wondered was, "What spider is the most dangerous in the world?" Unfortunately, though the internet is full of information, much of it is wrong, so it takes a bit of time to cross reference for the truth. However, I set about putting a list together and I wasn't surprised to find that the famous Black Widow is NOT the world's most dangerous spider!

By the way, do you know the difference between poisonous and venomous? Poison is absorbed or ingested and only affects a creature that touches or eats it. Venom is always injected by a variety of methods: bite, sting, tail stab, spine slash, spur spike, etc. A spider injects poison through its venom glands, which makes it a venomous creature. Animals like Poison Dart frogs secrete toxins through their skin, which makes them a poisonous creature.

I originally planned to do a little write up on each of the spiders in the following list but in the end decided that it would be better to just link to pages about each spider if viewers want to know more! :D ENJOY! :)