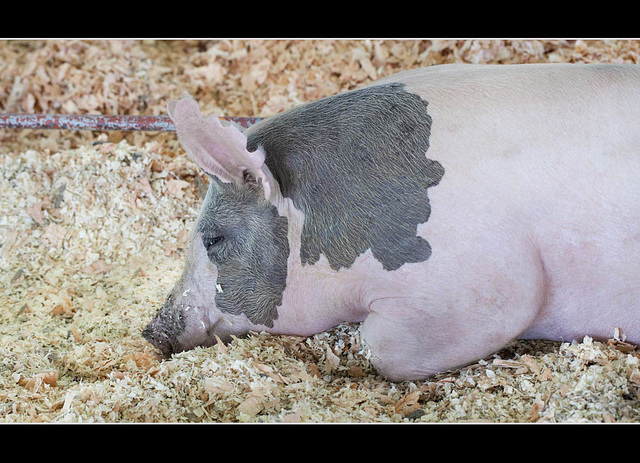 There are few things more adorable than a sleeping piggy! This one is so cute, and I was lucky enough to talk to the family that raised this one when Steve and I went to the Jackson County Fair a few weeks ago.

This pig was raised by a very friendly teenaged girl, whose proud father told me they had a working farm and raised all types of livestock, which was their livelihood. His daughter was really nice and very excited because after all her care. excellent handling and proper feeding, this beauty won first place for "Meat Pig" and was sold for $1700 after the class. She got the money, which she'll be putting in the bank, and next Spring she'll raise another piglet for the Fair! :)

This pig is a cross between an American Yorkshire and an American Berkshire. (I have a picture and write-up about an American Yorkshire here: Jackson County Fair: Bucket o' Pork) American Berkshires are black with white legs and faces. They were originally bred in England in the 1500's and established in the United States in 1875. They are also bred in Japan, where they are called Kagoshima Kurobutas. These pigs are prized for their tender, juicy, flavorful meat. Yummy! Is it wrong of me to want some bacon, pork chops and tenderloin right now?!

If you would like to know more about American Berkshires, Wiki has a page here: Wiki: Berkshire Pig

By the way, I've uploaded two other pictures today and I hope you'll visit them too!

Thanks to all of you who have visited and have left comments and favorites! I try to go to all of your pages within a day or two and is a highlight for me to see your beautiful photography! :)
Suggested groups:
Comments