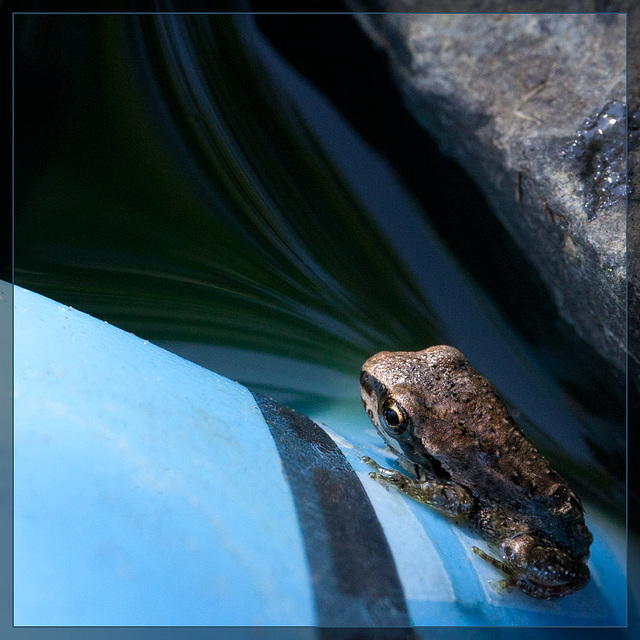 I was very surprised when I began taking pictures of the tadpoles and froglets at Lucky's Pond. I originally thought that the blue color and printed pictures would ruin all the images, but I discovered that the blue color influenced the way the water appeared in a nice way and the pictures add interest! I also never expected the muddy water to be anything but ugly, and instead, the water creates a wonderful surface for reflections, and the blue flow lines you see here are not from the blue plastic, they are actually a reflection of the sky!

This darling 1/4" Pacific Tree Frog youngster is showing one of the defining characteristics of this species: the band of black from its nose, enclosing its eye and going back to its foreleg and along its body at the midway mark. These frogs can be countless shades of green and brown with mottling, but all of them have this band of black.

Did you know that frogs come in many colors other than green and brown? The gorgeous Poisin Dart frog. include some of the most colorful species in the world, including cobalt blue, neon green, flaming orange, fire-engine red, day-glow yellow, and even purple!! The bright colors serve as a warning that they are poisonous, and in fact are the most deadly frogs in the world! (By the way, Poison Dart frogs bred in captivity are not poisonous--the toxins secreted on their skin comes from the insects eaten in the wild!)