Lucky's Pond: Growing Up is a Dangerous Business! 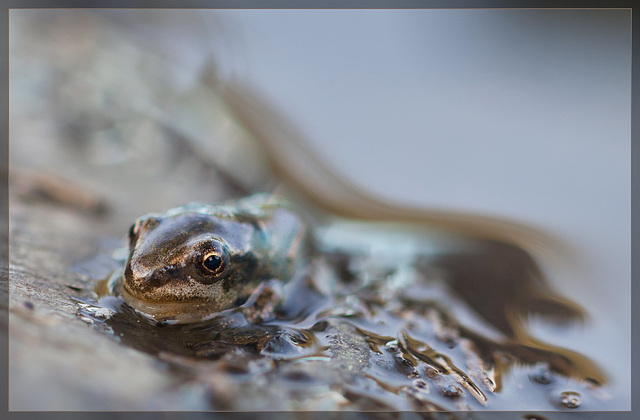 Although most of the tadpoles have now grown up and hopped away, Lucky's Pond still has plenty of polliwogs changing into froglets for me to adore. It's hard to find froglets on my daily visits now and there are usually only one or two hiding under a rock's edge or at the side of the pool, but I still see many tadpoles in the water. (HAPPY NOTE!! I just went out for a late night visit and found a half-grown froglet visiting, sitting in the place that many of them lined up for pictures...he looks like he's saying, "HEY! THIS ROCK SHRUNK! :D :D Totally adorable, what a fun discovery!!)

Even though I saved them from drying up, these little guys still have plenty to worry about. There are water boatsmen and backswimmer insects and a large water beetle that live in the pond too, and they eat tadpoles and froglets that aren't quick enough! Wasps that come to drink the water will also eat our little friends if they get the chance. If you can believe it, the tadpoles will eat one another too. Adult frogs are known to eat froglets and tadpoles, and they come every night to get wet, and probably to hunt as well.

Once the froglets hop out of the pond, they will need to rely on their instincts to survive. There is a garter snake whose home is right next to the pool and it surely eats some of the new hoppers who leave the pool. The environment is harsh and dry, and if their instincts don't tell every new froglet to seek the cool shade under bushes or in a safe hole during the day, they will succumb to the heat and dry conditions. There are ramps leading into the pond, and cool areas for them to easily hop to, but it's up to them to make it to safety. I know that most of them will die because that's just how it is, but if they're Lucky, they'll survive and will hopefully live to start a new family next spring! :)