← All with the keyword: white
← Those by: Janet Brien 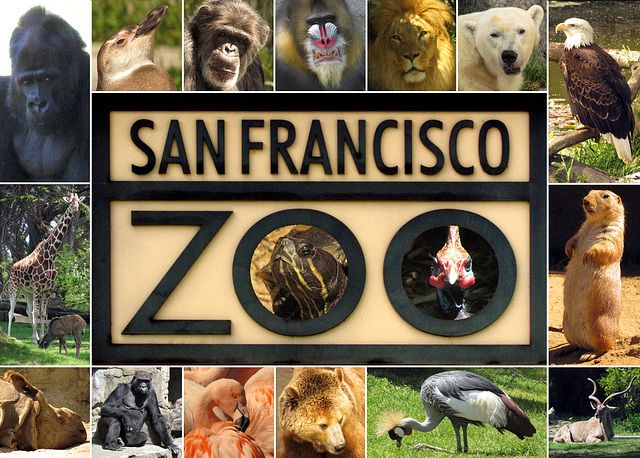 I'm in San Francisco for the week, visiting my dad, and this is Day 6! I am so sorry that I don't have time to leave comments while I'm gone, but I really appreciate every one of your visits and comments! They mean the world to me. *hugs* Miss you guys!!!

Ever since I got this Canon SX30 and have been to visit my father two previous times since I got it, I've been dreaming of going to the zoo...that's nearly 3 YEARS of wishing!! On each occasion, time or weather got in the way. This trip, I didn't want to get my hopes up, but one of the reasons I made my trip for 7 days instead of my usual 5 is that I hoped my father and I could get our chosen project out of the way before I had to leave. To my delight, our quilt photographing project was finished last night, and that left today free for something fun! Hooray!!! Though I offered to do something with him instead, my father wanted me to spend the day at the zoo without having to worry about him, so I could just relax and have fun. So I did!!!!

The San Francisco Zoo has changed SO MUCH since I was a child. I am 48.5 yrs old now and when I was a tiny kid, this zoo was the historical type of barbaric monstrosity with barred cages and cement everywhere. I didn't understand how awful it was as a wee child, but as I grew older, I didn't like to go to the zoo so much because I'd fallen madly in love with animals, and I really hated all the awful cages and cement areas for the animals to stand, either inside or out. The animals looked miserable in many cases, and furthermore, I wanted to murder everyone around me for hooting, hollering, teasing, and taunting the animals, and throwing things at them. It made me crazy.

In the past 20 years, I've visited the zoo perhaps 3-4 times. But a miraculous thing happened as time went on. Each time I visited, some horror of the past would disappear, replaced by a wonderful, open air, natural habitat with native plants and hidden/disguised barriers. What a wonder.

Today I was just FLOORED by my visit. I hardly recognize the zoo I went to as a child, as nearly all of it has been turned into lovely, spacious habitats where the animals can relax and enjoy themselves as much as that can be possible in a captive setting. Whenever possible, animals are fed in a way where they must forage to get their food. It's wonderful to see. The feeling I get from the animals is still not truly happy, but finally, I get a real sense that many are much more content here, for what that's worth.

One of the best things about the zoo now are all the signs plastered EVERYWHERE for people to Be Quiet. The signs say that people must not tease or taunt the animals, yell at them, throw things at them, or try to feed them. The animals must be treated with great respect. (!!! LOVE !!!) And, if anyone sees someone doing these things, to call the posted number and the matter will be attended to immediately. AMEN!!!!!!!!!!! *backflips across the room* So, for the first time in my life, I experienced a zoo without the usual desire to kill everyone around me!! I watched children make some racket, and parents telling them they must not do that! Once in a while a person would try to get an animal's attention, but it wasn't full of disrespect like I've always witnessed in the past. The only time I ever heard yelling and screaming was away from the animals, when kids were playing with one another. It was fantastic. What a change from the feeling of heartbreak I would get before. Naturally, I wish these animals were all free, but here's another thing: MANY of the animals have injuries or situations that would make it impossible for them to be free anyway, because they would not be able to hunt. The zoos of today are such a far cry from the zoos of my childhood, it's just fantastic that they are much less about exploitation and much more about conservation and preservation than they were before.

So there you have it. I had an AMAZING day!!! And, 375 pictures later, father picked me up, tired and content, my wish fulfilled! I had to work fast to get this collage done but I think it shows some of the amazing animals that I got to see!! Afterwards, we went out to dinner to top off a GREAT DAY!! Enjoy the pictures!! :)

Paul Frederic Simon (born October 13, 1942) is an American musician, singer, and songwriter. Simon's fame, influence, and commercial success began as part of the duo Simon & Garfunkel, formed in 1964 with musical partner Art Garfunkel. Simon wrote most of the pair's songs, including three that reached No. 1 on the U.S. singles charts: "The Sound of Silence", "Mrs. Robinson", and "Bridge Over Troubled Water". The duo split up in 1970 at the height of their popularity, and Simon began a successful solo career as a guitarist and singer-songwriter, recording three highly acclaimed albums over the next five years. In 1986, he released Graceland, an album inspired by South African township music. Simon also wrote and starred in the film One-Trick Pony (1980) and co-wrote the Broadway musical The Capeman (1998) with the poet Derek Walcott.Wikipedia: Paul Simon