SEEN IN SEEN IN

Rainbow at the Ship Canal 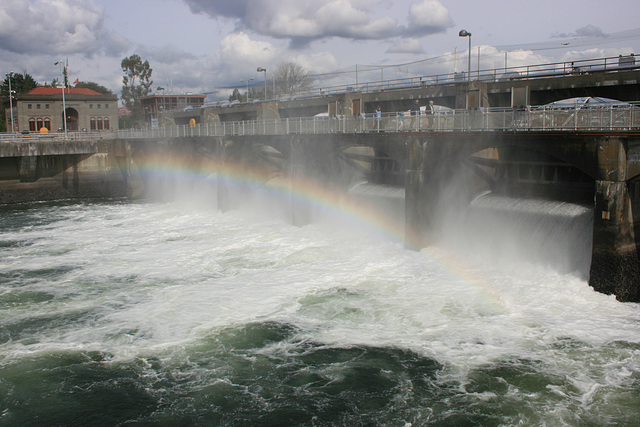 Hiram M. Chittenden locks and spillway on the Lake Washington Ship Canal, Seattle, Washington state. The Ship Canal connects Lake Washington to Puget Sound via Lake Union, right thru Seattle. The locks, administered by the US Army(!) Corps of Engineers, deal with the difference in water level between the Sound and the lake. They're on the far (north) side of the spillway.
The Canal was built in 1916, lowering the level of Lake Washington some 9 ft. It used to drain out to the south to the Duwamish River, but now its only outlet is thru the Canal. There's no _way_ the project would pass environmental muster these days! ;) Because it's now also the sole outlet for the lake, this set of spillway gates helps regulate water flow. The locks are also said to be unusual in that they're right at the boundary between fresh and salt water. The water in the foreground is Puget Sound.

Christine Boes-Schiller, Berny, Don Barrett (aka DBs travels), d and d 2 and 3 other people have particularly liked this photo

slgwv club
Thanks, everyone!
4 years ago. Translate | Permalink

Don Barrett (aka DBs… club
Argh! Yet again something I've missed and yet been nearby multiple times. I'm going to have to start checking my routes with you before I travel! :)

Thanks for the detail on this, now I've got to go look.
4 years ago. | Permalink

slgwv club
It's worth checking out--on a clear day! We lucked out on the weather here. There's also a formal garden on the north side. I visited the locks once years ago when we lived outside Seattle, but of course got no pix.
4 years ago. | Permalink