Group: Down the road I go

Down the road I go 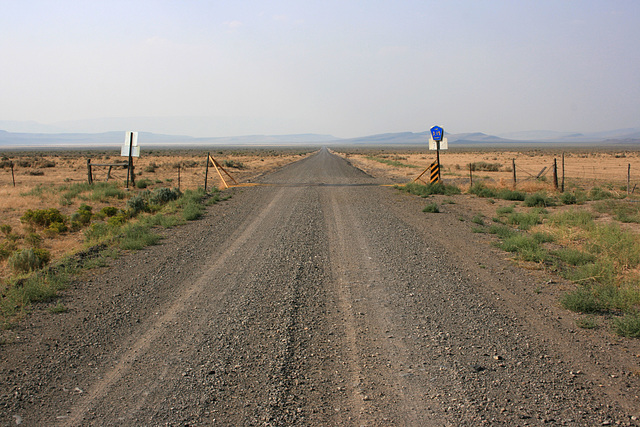 Washoe County Rd 34 entering Oregon from Nevada, where the route becomes Lake Co. 3-15 (Coleman Valley Rd.) Pretty arbitrary, and in a very remote part of both states!
And that's where the history comes in. The state line here is the 42nd parallel, as well as could be established by 19th century technology. This parallel now defines the northern boundary of California, Nevada, and western Utah and the southern boundary of Oregon and Idaho, and _that's_ because the 42nd parallel was the northern limit, by treaty, of the Spanish land claims, which were later inherited by Mexico, and then by the U.S. after the treaty of Guadalupe Hidalgo in 1848. (All this, it goes without saying, without any consideration of, or input from, the local Native American tribes.)
So, once both sides of this line were under US sovereignty, wouldn't it have made more sense to make the new state lines less arbitrary? John Wesley Powell, one of the "founding fathers" of the US Geological Survey, thought so, and advocated drawing state lines along watershed boundaries. He is quoted as saying something like, "You can make work for surveyors, or for lawyers." Well, this is America! Of course Congress made work for lawyers-- ;)

Ruth club
Thank you for posting your wonderful image to
Interesting History
5 months ago. | Permalink