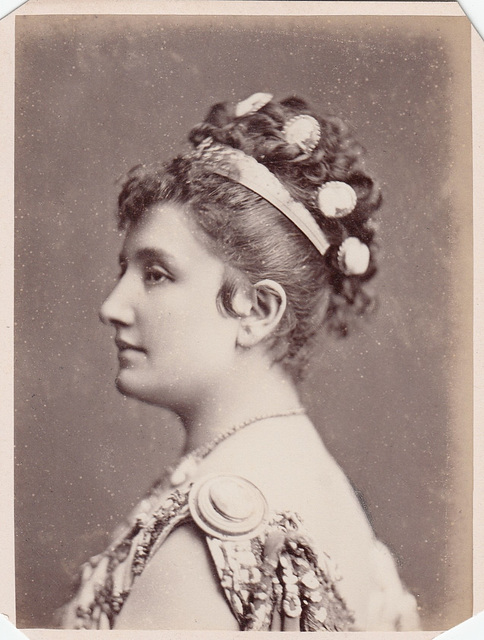 Antonie Link (1853-1931); Hungarian soprano.
As a child she already sang in 1864 in Budapest the soprano part in the oratorium "Die Legende von der heiligen Elisabeth" by Franz Liszt. When her family moved to Austria, she performed children's roles at the Viennese Burgtheater. She studied singing with Laroche and became a singer in the choir of the Wiener Hofoper. There she drew the attention of Franz Jauner, the director of the Carl-Theater, who engaged her as an operetta singer for his company. Here she made her debut in 1872 as Frincke in Von Suppé's "Flotte Bursche". She was very successful and her succes even increased when she performed the role of Ganymede in Offenbach's "Die schöne Helena", with Marie Geistinger as Helena. In 1876 she created the role of Wladimir Dimitrowitsch Samoiloff in "Fatinitza" and in1879 the title role in "Boccaccio", both works of Franz von Suppé. In 1877 she created the title role in "Prinz Methusalem" by Johann Strauss II. In 1879 she retired from the stage. Her sister Sophie Link (1860-1900) was a well known mezzo-soprano.
Suggested groups:
Comments