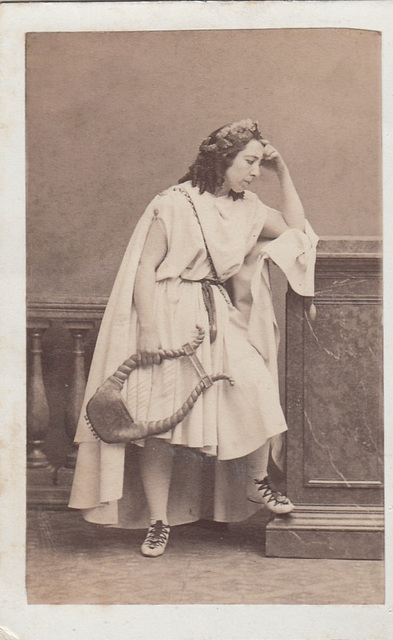 Pauline Viardot-Garcia (1821-1910); French mezzo-soprano. She created the role of Fidès in Meyerbeer's "Le prophète" (1849) and the title role in Gounod's "Sapho" (1851). She was the younger sister of the legendary prima donna Maria Malibran (1808-1836) and the famous baritone/voice teacher Manuel Garcia jr. (1805-1906). She studied singing with her mother -the soprano Joacquino Sitchez (1780-1854)- and her brother Manuel jr. In 1839 she made her stage debut in London at the Her Majesty's Theatre as Desdemona in Rossini's "Otello". In that year she made her Paris debut at the Théâtre-Italien performing the same role with overwhelming succes. In 1840 she married the director of the Théâtre-Italien Louis Viardot and from then on she performed under the name of Pauline Viardot (-Garcia). In the following years she celebrated great triumphs at this theatre. In the season 1843/44 she made guest appearances at St. Petersburg and in 1847 in Berlin and Dresden. In the years 1848/51 and 1854/55 she regularly appeared at London Covent Garden. During these years, she was at the peak of her career and she distributed her triumphs between Paris and London. In the 1860's she incidentally performed on the stage; by that time she had moved to Germany and lived in Baden-Baden. After the Franco-Prussian War (1870/71) she returned to Paris where she became a well sought after vocal teacher; her most famous pupils were Désirée Artôt, Aglaja Orgeni, Marianne Brandt, Annie Louise Cary and her own daughter louise Viardot (1841-1918).


On the photo she is seen as Orphée in Gluck's "Orphée et Eurydice".
Suggested groups:
Comments